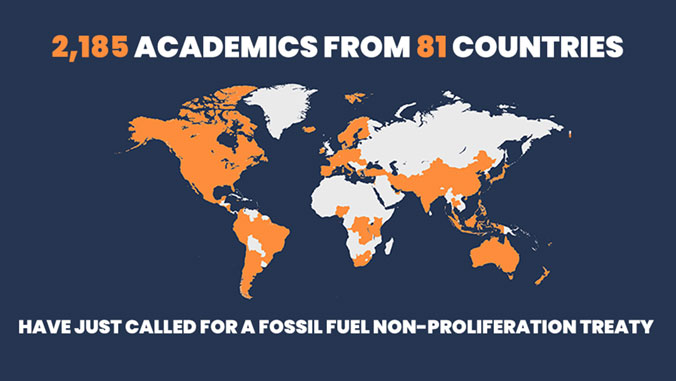 On the eve of a United Nations General Assembly meeting, thousands of academics urged governments to negotiate an international treaty that tackles the climate crisis at its source, fossil fuels.

Hundreds of academics across disciplines from 69 countries, including researchers from the University of Hawaiʻi at Mānoa, delivered a letter demanding a Fossil Fuel Non-Proliferation Treaty to manage a global phase out of coal, oil and gas to governments gathering at the UN General Assembly.

In the open letter, the academics recognize that the burning of coal, oil and gas is the greatest contributor to climate change—responsible for almost 80% of carbon dioxide emissions since the industrial revolution. Furthermore, they noted that, “air pollution caused by fossil fuels was responsible for almost 1 in 5 deaths worldwide in 2018.”

The letter comes on the heels of last month’s Intergovernmental Panel on Climate Change (IPCC) report, which was heralded as a “death knell” for the fossil fuel industry by the UN Secretary General, António Guterres and revealed that 86% of CO2 emissions in the last decade are from the burning of fossil fuels.

“The most recent climate report from the IPCC makes it clear that we are approaching dangerous tipping points if humanity does not lower carbon emissions immediately,” said Mark Hixon, professor of marine biology at UH Mānoa. “As a father and grandfather, I am gravely concerned about our collective future. The solutions to this crisis are within reach—all that is lacking is political and corporate will.”

Despite this, national governments plan to expand fossil fuel production at levels that would result in around 120% more emissions than what is in keeping with the Paris Agreement target of 1.5°C of warming.

“Hawaiʻi and other islands are already facing ever intensifying effects of climate disruption, including altered rainfall patterns, avian malaria mosquitoes reaching endangered birds at higher elevations, coastal erosion caused by sea-level rise, and bleaching and dying coral reefs,” Hixon added. “We need to do our part to address climate change while we still can.”

This effort is an example of UH Mānoa’s goal of Building a Sustainable and Resilient Campus Environment: Within the Global Sustainability and Climate Resilience Movement (PDF), one of four goals identified in the 2015–25 Strategic Plan (PDF), updated in December 2020.

The full letter and list of signatories is available online.