A portion of this story was taken from an August 2021 post on the University Health Partners news site.

The former chair of the University of Hawaiʻi at Mānoa John A. Burns School of Medicine’s (JABSOM) Department of Medicine, Elizabeth “Liz” Tam, died on October 8. She was a pulmonologist who championed the causes of the American Lung Association in Hawaiʻi for tobacco control and vog research.

In a statement to the JABSOM ʻohana, Dean Jerris Hedges wrote: “Dr. Tam was the quintessential academic quadruple threat. She cared for many through her pulmonary practice. She did research on the pulmonary impact of vog exposure to those living on Hawaiʻi Island, and helped oversee health disparities research programs for the school. She oversaw a large clinical department which housed the school’s largest graduate medical education program. She was that department’s second Native Hawaiian chairperson and served in that position for nearly two decades. 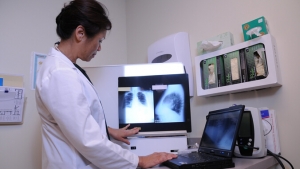 “She was an exemplary educator who taught in the classroom, at the bedside and in the larger community as a tireless spokesperson for lung health. We will have the opportunity to reflect more on her life and remarkable career in the coming days, but I ask that today we acknowledge the loss we are all experiencing and the gift of aloha we have all received from Liz. Our thoughts are also with her family and her departmental ʻohana who were such important parts of her life,” Hedges concluded.

Tam retired at the end of July 2021. On October 1, the American Lung Association inquired if they had permission to present an award at the Miss Hawaiʻi Volunteer pageant, part of which requires the contestants to raise funds and awareness for the Lung Association.

“One contestant that goes above and beyond will receive a special recognition from us. This will be an ongoing award that we present to one young lady that has taken lung health as a major initiative,” said Pedro Haro, executive director of the American Lung Association in Hawaiʻi. “We would love to name it ‘The Dr. Elizabeth Tam Breath of Hope Award,’ to be presented during the pageant while mentioning how Dr. Tam was an influential researcher for lung health and an incredible supporter of the Lung Association, tobacco control and vog research.”

My philosophy in all this is, as a mom, a teacher, and a physician, you get so that people don’t need you anymore. You push for this independence and empower them. That’s my goal.
—Elizabeth “Liz” Tam

A member of JABSOM’s faculty since 1992, Tam served her last 15 years as professor and chair of the Department of Medicine. She was also the American Lung Association of Hawaii and Leahi Fund Endowed Chair in Respiratory Health at JABSOM. Tam was the 2016 recipient of the Breathe Easy Champion Mauli Ola (Breathe of Life) award from the American Lung Association in Hawaiʻi, and a board member of ʻAhahui o na Kauka, Association of Native Hawaiian Physicians. She continued to actively teach and mentor pre-medical and medical students throughout her years at JABSOM.

Tam was double-boarded (internal medicine and pulmonary medicine) and recognized as a caring mentor who contributed much to undergraduate medical education and to JABSOM’s residency program.

She has also generously given her time to serving the community at large. A vivacious and articulate speaker, Tam was frequently called upon by the media to offer her considerable expertise to efforts to educate the public.

As a featured speaker at the JABSOM Women in Medicine Speakers Forum in October of 2020, Tam concluded her talk by saying: “My philosophy in all this is, as a mom, a teacher, and a physician, you get so that people don’t need you anymore. You push for this independence and empower them. That’s my goal. That’s generally how I’ve operated.”

Tam talks about why she fights the fight against tobacco use