After eight months of isolation, the faux astronauts on the longest space analog study ever conducted on U.S. soil will wrap up their research mission on Saturday, June 13.

The Hawaiʻi Space Exploration Analog and Simulation (HI-SEAS), led by researchers at the University of Hawaiʻi at Mānoa, includes six crew members who gave up their normal lives to serve as simulated astronauts for the past eight months. The NASA-funded research is gaining insights into the human factors that contribute to astronaut crew function and performance over time—including the psychological, social, and biological challenges of isolation and confinement.

Like its predecessor missions—including a four-month study in early 2014—the data from this eight-month HI-SEAS mission is anticipated to expose many unexpected realities that future Mars explorers will endure once they become situated on the planet surface in a small space for a prolonged period of time. 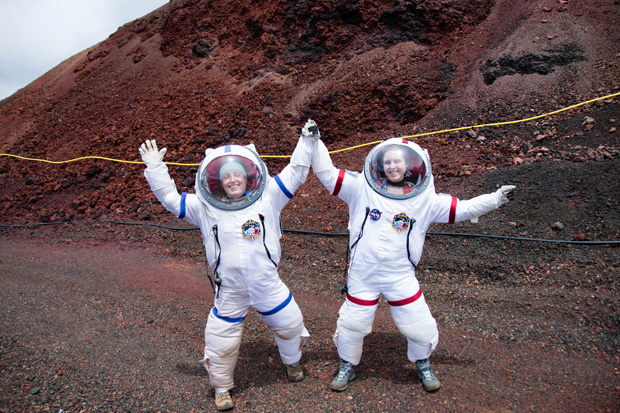 “I think sending people to Mars would be an inspiring and valuable thing to do, so I’m happy to be able to contribute to the knowledge necessary for that to happen,” HI-SEAS crew member Zak Wilson told Space.com in an interview earlier this year. “I’d also love to be one of the people to get to go to Mars, so this is about as good a test/approximation as I can manage for how I would handle that while remaining on Earth.”

The Journey to Mars for a human crew will be eight months each way, not including time spent exploring the surface of Mars.

On June 13, after the current HI-SEAS mission ends, the crew members plan to celebrate by taking a plunge from an Army Chinook helicopter, simulating their re-entry to the Earth’s atmosphere. Falling from the sky at 100 miles per hour over the Kona side of Hawaiʻi Island, the crew will be guided safely to Earth’s surface with the tandem support of the U.S. Army Golden Knights Parachute Team.

Members of the public are invited to watch this exciting re-entry at Old Airport Recreation Area̱s soccer fields in Kona. The jumps will begin at 11 a.m. After landing, there will be opportunity to meet the crew and the Golden Knights until 3 p.m. For more information, click here.