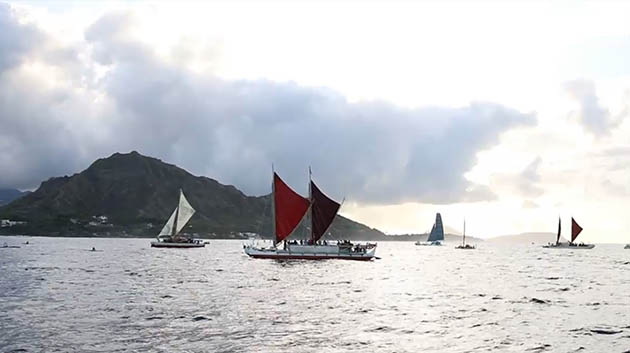 Amid the blowing of pū and the cheering of thousands gathered at Magic Island, the Hōkūleʻa sailed home in June 2017 after a three-year, 40,000-mile voyage around the world.

It was an event of deep significance to the University of Hawaiʻi ʻohana. Countless UH students, faculty, staff and alumni served the voyage in myriad ways, as volunteers, navigators, captains and scientific researchers.

At the homecoming, Polynesian Voyaging Society President Nainoa Thompson reiterated his assertion that UH is “hands down” the most important institution in the region.

“The university has been instrumental in every part of this voyage,” said UH President David Lassner who also served as a crewmember. “Most obviously we are the homeport for the Hōkūleʻa, Hikianalia, Hawaiʻi Loa the Polynesian Voyaging Society. They are our partners and residents at our Marine Education Training Center at Sand Island, part of Honolulu Community College.”

Prior to undertaking the worldwide voyage, Thompson consulted with UH scientists from the School of Ocean and Earth Sciences and Technology, Institute for Astronomy, oceanography department and more. “There were enormous amounts of research, …we knew who to call,” he said.

Doctors at the John A. Burns School of Medicine made sure the crew was healthy enough to voyage and helped to keep them that way. During the voyage, UH held systemwide gatherings at College Hill and UH Hilo to share information and commitments to Mālama Honua or “care for our Earth.” One key commitment came from the UH Mānoa College of Education: teach the values of Mālama Honua to the future teachers studying in the college.

The University of Hawaiʻi is one of more than a hundred educational partners who have signed the Promise to the Children, which says, in part, “…we promise to create, sustain and navigate a movement dedicated to future generations, one that is imbued with the goodness of Hōkūleʻa and the wisdom born of her legacy.”

Thompson said, “Twenty years from now, sustainability, I promise you, will be figured out. We will be on alternative energy 20 years from now. We will have figured out issues of food sovereignty to get off the 95 percent that we import. Itʻs a very dangerous situation that we have in Hawaiʻi and there’s no other institution that has the mandate and the mission and the power to do that.”