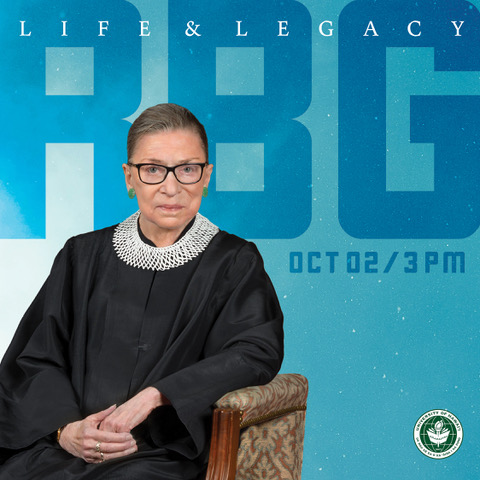 Ruth Bader Ginsburg was a giant of American history. As a law professor and litigator for the American Civil Liberties Union, she was the architect of the gender equality revolution in the law. As an appellate judge and then a Supreme Court Justice, she was known for her precise, path-breaking decisions, and later for searing dissents. Later in life, she became a feminist and pop cultural icon, the Notorious R.B.G.

Join us to celebrate her life and her life’s work, to take stock of her influence on the law and society, and to look back on her personal life and her many ties to the University of Hawai‘i. Camille Nelson, Dean of the William S. Richardson School of Law, will moderate the forum, with remarks by friends and colleagues of the late Justice, as well as scholars of her work. Special guests include: Sylvia Law, Elizabeth K. Dollard Professor of Law, Medicine and Psychiatry, Emerita, and Co-Director, Arthur Garfield Hays Civil Liberties Program, New York University; Andrea Freeman, Professor of Law at the William S. Richardson School of Law and member of the Litigation Committee of the ACLU Hawaii; Ronette Kawakami, Associate Dean, William S. Richardson School of Law; and Sabrina McKenna, Associate Justice, Hawai‘i State Supreme Court.