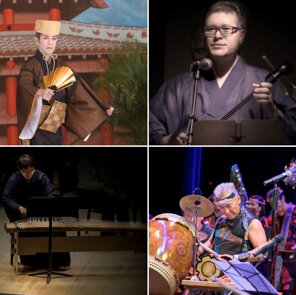 If, in fact, all memory is constructed, then how do keepers of a tradition sleep soundly at night? Meet artists Kenny Endo, Norman Kaneshiro, and Yukie Shiroma as they share their explorations of the intersection of Japanese taiko, Okinawan sanshin, and modern dance; and between the old and the new. Hear their stories of the collaborative process. The project is the first of its kind and the first collaboration between the three artists. The culminating Concert will be held at Leeward Theatre in January 2022.

The “Imaginary Homelands”artistic collaboration began in 2019 with inspiration from writer, Salman Rushdie, who describes our remembrances of homelands as like a broken mirror, with some of its fragments lost forever. The act of revisiting the cultural past, he writes, is more about memory and forgetting than recreating precisely what once was.

Kenny Endo was the first non-Japanese national to be honored with a “natori,” a professional stage name. He is Artistic Director of the Taiko Center of the Pacific and tours extensively throughout the U.S. and internationally with his innovative cross-cultural musical collaborations.

Norman Kaneshirois a founder and musical director of Ukwanshin Kabudan, an Okinawan performing arts organization, and instructor of Okinawan music in the University of Hawai‘i’s Department of Music.

Yukie Shiroma, modern and Okinawan dancer, is instructor of Okinawan dance in the University of Hawai‘i’s Department of Theatre and Dance and Artistic Director of mask physical theatre company, Monkey Waterfall.

In addition to the three primary artists, the show will also include Derek Fujio, Music Department Chair and Orchestra teacher at Kaimuki Middle School and president of the Okinawan koto organization, Ryukyu Sokyoku Koyokai Hawaii.