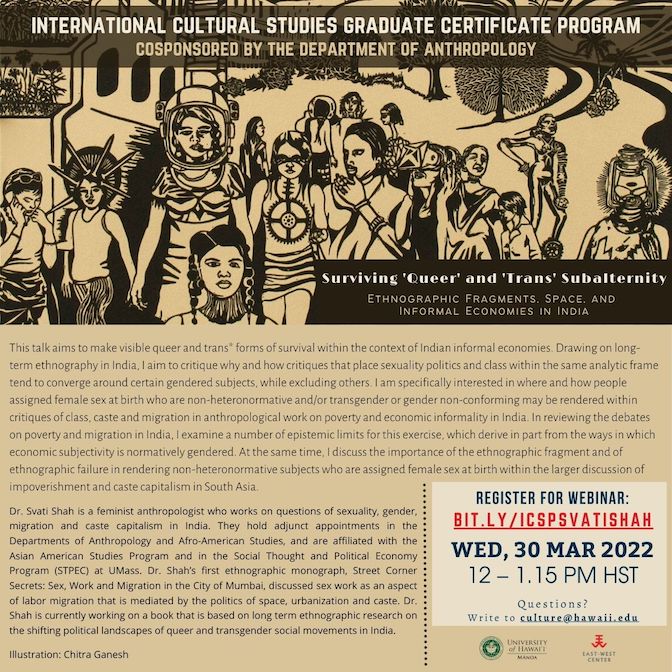 Surviving 'Queer' and 'Trans' Subalternity: Ethnographic Fragments, Space, and Informal Economies in India This talk aims to make visible queer and trans* forms of survival within the context of Indian informal economies. Drawing on long-term ethnography in India, I aim to critique why and how critiques that place sexuality politics and class within the same analytic frame tend to converge around certain gendered subjects, while excluding others. I am specifically interested in where and how people assigned female sex at birth who are non-heteronormative and/or transgender or gender non-conforming may be rendered within critiques of class, caste and migration in anthropological work on poverty and economic informality in India. In reviewing the debates on poverty and migration in India, I examine a number of epistemic limits for this exercise, which derive in part from the ways in which economic subjectivity is normatively gendered. At the same time, I discuss the importance of the ethnographic fragment and of ethnographic failure in rendering non-heteronormative subjects who are assigned female sex at birth within the larger discussion of impoverishment and caste capitalism in South Asia. Dr. Svati Shah is a feminist anthropologist who works on questions of sexuality, gender, migration and caste capitalism in India. They hold adjunct appointments in the Departments of Anthropology and Afro-American Studies, and are affiliated with the Asian American Studies Program and in the Social Thought and Political Economy Program (STPEC) at UMass. Dr. Shah’s first ethnographic monograph, Street Corner Secrets: Sex, Work and Migration in the City of Mumbai, was published in 2014 by Duke University Press and by Orient Blackswan in India. It discussed sex work as an aspect of labor migration that is mediated by the politics of space, urbanization and caste. Drawing on a decade of ethnographic and archival research, the book showed that sex work is part of a range of economic strategies for survival among informal sector workers in Mumbai. Dr. Shah is currently working on a book that is based on long term ethnographic research on the shifting political landscapes of queer and transgender social movements in India. The book, Dissent in Queer Times: Sexuality Politics and India’s Second (Undeclared) Emergency, offers genealogy of LGBTQI+ spaces that emerged from the autonomous feminist groups and the civil liberties and democratic rights organizations that initially formed in response to the declared (first) Indian Emergency of 1975-77. Date and Time: 30 March, 2022. 12-1.15 P.M.