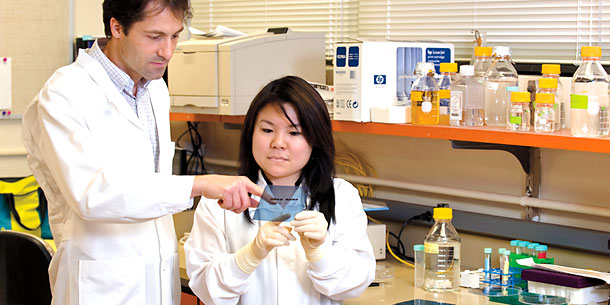 Three technologies developed by the University of Hawaiʻi are now owned by Honolulu-based Pono Corporation under an agreement that will allow UH to realize the value of the technologies sooner than it would with a traditional licensing deal due to long drug development timelines.

Under the terms of a technology commercialization agreement signed by the university’s Office of Technology Transfer and Economic Development with Pono, the university receives equity stake in the company and is now a shareholder in Pono in exchange for an assignment of the technologies.

“Pono is honored to have the opportunity to build on the work done at the University of Hawaiʻi by moving forward with the commercialization of these technologies,” said Kaleo Taft, Pono’s chief technology officer.

Pono will work to develop the technologies under the agreement with a focus on moving them through the regulatory approval process.

“We are looking forward to this promising opportunity to work with the company towards the clinical development of our novel anti-cancer drugs,” said André S. Bachmann, associate professor and chairman of the Department of Pharmaceutical Sciences at the UH Hilo College of Pharmacy.

Bachmann is one of the inventors of the proteasome inhibitor discovery and a co-inventor of the nanocarrier drug delivery system with Mahavir Chougule, assistant professor at the UH Hilo College of Pharmacy.

The proteasome inhibitors discovered by Bachmann and his collaborators are a new class of compounds potentially useful for anti-cancer and other therapeutic uses. The proprietary nanocarrier system developed by Bachmann and Chougule aims to provide improved cancer treatment through targeted, tumor-specific delivery of chemotherapeutic drugs.

Read the article in the April 2010 issue of Mālamalama featuring Bachmann’s research.

At the University of Hawaiʻi Cancer Center, Carl-Wilhelm Vogel and David Fritzinger developed the cobra venom factor proteins, which are modified for treatment of diseases such as reperfusion injury and autoimmune diseases.