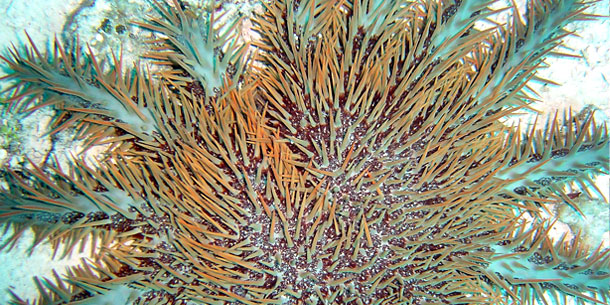 One of the greatest biological threats to tropical coral reefs can be a population outbreak of crown-of-thorns sea stars. Outbreaks can consume live corals over large areas, a change that can promote algal growth, alter reef fish populations and reduce the aesthetic value of coral reefs. Despite more than 30 years of research, the triggers and spread of crown-of-thorns outbreaks are not fully understood.

Human impacts such as urbanization, runoff and fishing have been correlated with outbreaks, but some outbreaks continue to occur in the absence of known anthropogenic triggers. Waves of a spreading outbreak that moves southerly along the Great Barrier Reef are termed secondary outbreaks because they are thought to be seeded from dispersing larvae of a primary outbreak upstream.

This secondary outbreak hypothesis has been widely accepted but a team of scientists from University of Hawaiʻi at Mānoa’s Hawaiʻi Institute of Marine Biology and the Joint Institute for Marine and Atmospheric Research and Rutgers University demonstrated that unlike on the Great Barrier Reef, crown-of-thorns larvae are not moving en masse among central Pacific archipelagos. In fact, crown-of-thorns outbreaks came from local populations.

On a finer scale, genetic differences were detected among reefs around islands and even between lagoon and forereef habitats indicating that the larvae of this species are not routinely reaching their full dispersal potential, and are not fueling outbreaks at distant sites.

Mānoa’s Christopher E. Bird, Derek J. Skillings, Molly A. Timmers and Robert J. Toone proved that crown-of-thorns outbreaks are not some rogue population that expands and ravages across central Pacific reefs. Instead, they hypothesize that nutrient inputs and favorable climatic and ecological conditions likely fuel outbreaks of local populations.

“Our recommendation to managers is to seriously consider the role that environmental conditions and local nutrient inputs play in driving crown-of-thorns outbreaks,” said Toonen.

For more information, read the news release or the full paper.