Every day, hundreds of University of Hawaiʻi at Mānoa students walk by a sculpture in the Queen Liliʻuokalani Student Services Center. It honors 169 UH students who were members of the ROTC program when Japan bombed Pearl Harbor in 1941, plunging the country into World War II. They were immediately mobilized into the Hawaiʻi Territorial Guard and began keeping watch over vital installations.

“We were students who answered the call on December 7,” said Ted Tsukiyama

“We thought we were serving our country, but a month and a half later, we were all kicked out,” said fellow UH ROTC student Yoshiaki Fujitani.

The government classified the ROTC students as enemy aliens because of their Japanese ancestry. They responded by offering to serve in a labor battalion dubbed the Varsity Victory Volunteers.

“For one year, this group of university students worked out of Schofield,” said Tsukiyama.

They built barracks, smashed rocks and performed other menial tasks until the US Army formed an all Japanese American unit, the famed 442nd Regimental Combat Team. The Varsity Victory Volunteers made up the core of the 442nd while other members served in military Intelligence.

Seven died in combat during the war.

“This is a really, it’s a sad story, and it’s an inspirational story at the same time, of a group of young men, who offered to serve,” said UH President David Lassner at the ceremony.

The sculpture that honors them is a permanent reminder to the UH community of their inspiring dedication to the United States, that initially questioned their loyalty.

“You know my dad was a very humble guy, he grew up with nothing and sacrificed. You know, a lot of the veterans they joined and really made it easy for our generation to move forward and achieve things. They paved the way for us,” said Scott Hayashi, whose now deceased father Yoshimi Hayashi was a Varsity Victory Volunteer.

There is a plaque at the base of sculpture with the names of Varsity Victory Volunteers and another that tells the amazing story of a group of UH students, who were once, a long time ago, just like the students who walk by every day.

“The University of Hawaiʻi has been a part of our life, and for the university to accept us as you know, very integral parts, I think is very important for us,” said Fujitani. 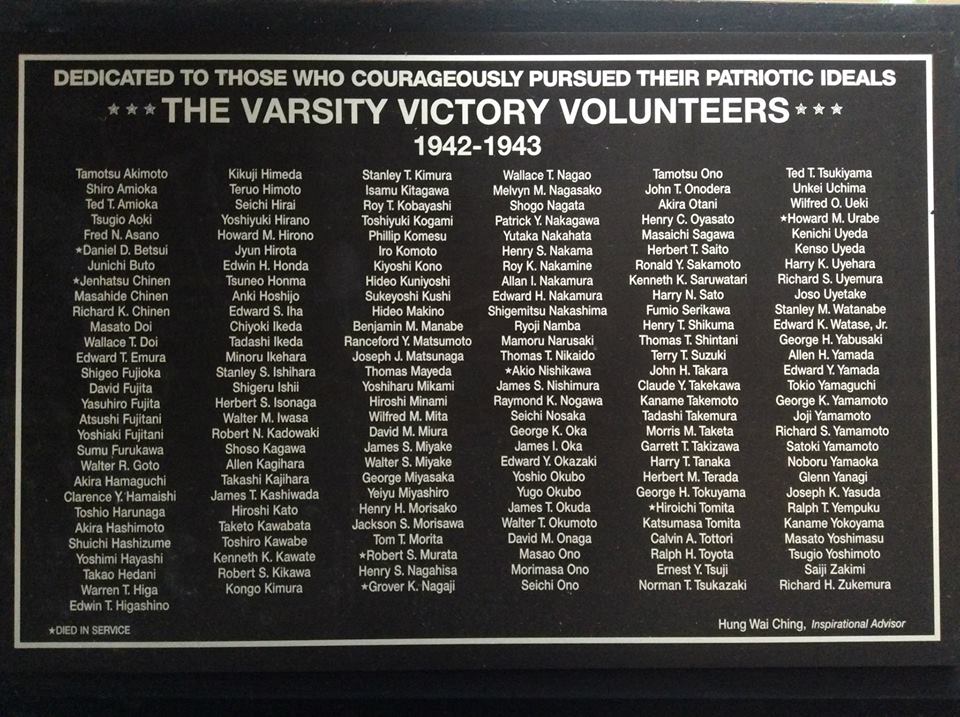