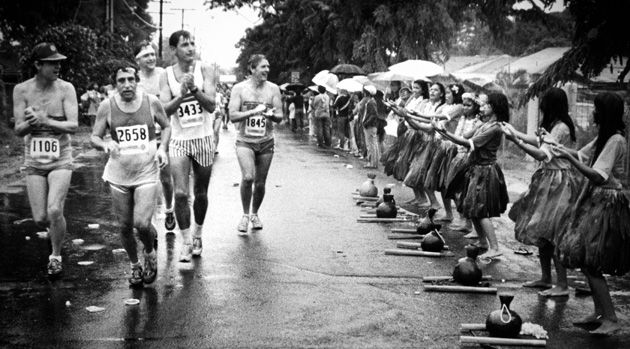 Published by UH Press, The People’s Race Inc. captures the personalities, politics and power plays behind the burgeoning growth of the Honolulu Marathon and provides a unique lens for understanding the complex history of the sport itself. Drawn from revealing interviews with those closest to the event, as well as exhaustive research, Tsai presents an insider’s account of how organizers forged lucrative partnerships with foreign investors, helped initiate the age of African dominance of the marathon and weathered some of the most bizarre challenges imaginable. The book also exposes the ways in which the growth of the Honolulu Marathon mirrored the explosive, at times bewildering, development of post-statehood Hawaiʻi.

“It’s also the story of people, and that’s, I think, the heart of it,” said Tsai, “a core of really hardworking, very intelligent, very driven people who don’t always get along. Sometimes they competed or clashed in their direction of the marathon but they ultimately over the course of more than 40 years have strung together a series of races that has changed Hawaiʻi in many ways and has had a huge impact on the world of road racing.

The Honolulu Marathon debuted in 1973 as the shared vision of a maverick cardiologist bent on proving the benefit of long-distance running for cardiac patients and an impetuous mayor eager to prove Honolulu the equal of the top cities in the county. Over a span of forty-plus years, the race has grown into one of the largest marathons in the world, a $100 million economic engine for its home state, and a launch pad for some of the most dominant long-distance runners in modern history.

Tsai is a UH Mānoa alumnus, and The People’s Race Inc. is the result of his PhD dissertation research.

Purchase The People’s Race Inc.: Behind the Scenes at the Honolulu Marathon from the UH Press website.