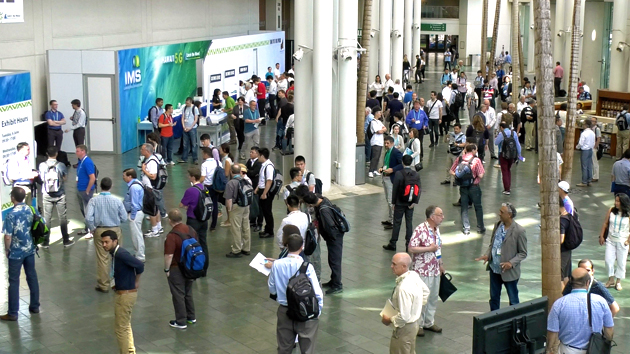 The IEEE MTT-S International Microwave Symposium (IMS)2017, the state’s largest conference of the year, returned to the Hawaiʻi Convention Center in June 2017. The conference generates an estimated $38 million in visitor spending.

It was only the second time that the symposium was held off of the North American continent in its 60-year history. University of Hawaiʻi at Mānoa Electrical Engineering Professor Wayne Shiroma led the team that brought the conference to Hawaiʻi in 2007, when it was also the largest conference in the state. His former UH engineering students, who served on his 2007 steering committee, were instrumental in helping to bring this record-breaking conference back 10 years later. The UH group worked on IEEE MTT-S IMS2017 for nine years, putting in thousands of volunteer hours.

UH Mānoa electrical engineering graduate Justin Akagi, who is now a nuclear engineer at Pearl Harbor, helped with both meetings and served as vice chair of IEEE MTT-S IMS2017. “A lot of us are kamaʻaina, so we are excited to be there to support Hawaiʻi in whatever way we can—by helping to bring the conference here, make it work and be a great event,” Akagi said.

“The thing that I’m absolutely the most impressed with, the thing that I am most proud of, is the fact that we’re taking UH students and molding them into the leaders of tomorrow,” said Shiroma, who also served as IMS chair.

The Hawaiʻi Tourism Authority, Meet Hawaiʻi and the state’s tourism industry honored the UH Mānoa College of Engineering as the ʻElele Organization of the Year in 2017 for its role in securing more than $170 million in convention business to the state. That’s just a fraction of the tourism business UH has helped to generate over the years.

“Hawaiʻi is known for its sand, surf and sun, but we should also be known for our science, and that science is largely completed by the University of Hawaiʻi. They provide the general scientific infrastructure for the technical conferences we are attracting,” said Debbie Zimmerman of the Hawaiʻi Tourism Authority’s global meetings, conventions and incentives division. “UH represents over half-a-billion dollars in visitor spending since the opening of the Hawaiʻi Convention Center.”