A new book The World of Applied Electromagnetics—In Appreciation of Magdy Fahmy Iskander, published by Springer, commemorates four decades of Iskander’s research in electromagnetic and wireless communications technologies and contributions to engineering education.

Iskander is an electrical engineering professor and director of the Hawaiʻi Center for Advanced Communications in the College of Engineering at the University of Hawaiʻi at Mānoa.

Two of Iskanderʻs former graduate students, Akhlesh Lakhtakia, who serves as the Charles Godfrey Binder Professor in Engineering Science and Mechanics at Penn State University, and Cynthia M. Furse, professor and associate vice president for research at the University of Utah, were co-editors of the book, recognizing the long and distinguished career of Iskander as a researcher, educator and leader in professional and academic communities. 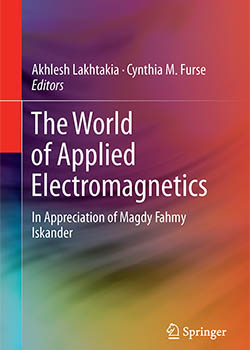 ​The preface was contributed by a colleague from the National Science Foundation, and chapter one, written by the co-editors, ​summarizes some of Iskander’s research contributions. Iskander provided an overview chapter “Four Decades of Academic Career in Electromagnetic Research and Education.” The book ​also ​includes 25 chapters contributed by Iskander’s former graduate students and Institute of Electrical and Electronics Engineers (IEEE) colleagues from twelve countries​: France, Spain, Italy, Poland, the United Kingdom, Japan, China, Taiwan, Malaysia, Australia, Canada and the U.S.

He has published more than 25​0 papers in technical journals and book chapters,​ holds eleven​ patents and has made numerous presentations at national and international conferences.

​Iskander is the founding and continuing editor-in-chief of the award-winning journal Computer Applications in Engineering Education, by John Wiley & Sons and now in its 25th year of publishing, and has organized several IEEE international conferences in Hawaiʻi that contributed an estimated $65 million in convention business to the state of Hawaiʻi.

His implementation of the National Science Foundation Research Experience for Teachers program in Hawaiʻi resulted in the donation of hundreds of laptop computers and the establishment of wireless networks in 28 middle schools. Iskander continues to conduct research in electromagnetic technologies with applications in wireless communications and medical applications.