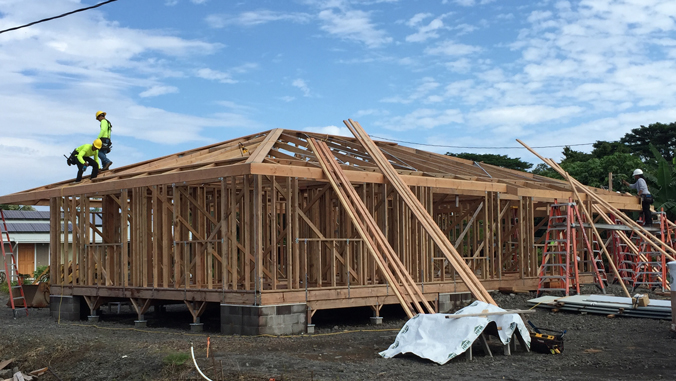 Physics Professor Philippe Binder at the University of Hawaiʻi at Hilo co-authored a paper that attributes the United States housing boom from 1980 to 2008 to the increased availability of money made possible by legislation designed to promote the growth of a secondary market for trading mortgages.

Binder, working at the College of Agriculture, Forestry and Natural Resource Management, collaborated with Kathleen Sealey from the University of Miami and King Burch, an independent finance and real estate researcher based in Honolulu, to produce the study, “Financial credit drives urban land-use change in the United States,” published in the March 2018 issue of Anthropocene.

The authors sought to gain a better understanding of why conservationists and natural resource managers have lost ground in the past 20 years, more species are in decline, more protected areas are increasingly isolated with threats from development on all sites and large, lucrative development properties were proposed, approved and funded at rates faster than the human population growth rate.

Their research covered a three-year period, and included construction of a case study for South Florida to examine the complex, coupled systems of finance and land use change. Their findings concluded that the driver for the housing boom was the increased availability of credit, and the ability to transfer investment risks, which allowed more people to buy more expensive houses.

Recognizing the connections between environmental change and financial credit

Using ideas from ecology, finance, urban studies and complex systems, the authors develop a hypothesis on fundamental shifts in the flow of money throughout the entire development and construction process. The paper explores a basic premise that “nothing happens without funding,” and explains to a non-finance audience the financial instruments and innovations that diversify the sources of loans and credit through globalization of mortgage-based securities.

Their ideas were put to the test by examining operational data and documents from Lennar Corporation, one of the largest developers in the country, and “following the money.” The analysis identified various interactions with capital markets and financial institutions, including those in-house, which supported their hypothesis. The study also found that most mortgage lending in the U.S. is currently funded through the global money market via the trading of mortgage-based securities, rather than locally.

“This system is now only one part of an enormous shadow banking industry, which trades diverse asset-backed securities with relatively little regulation,” the paper states.

The authors say recognizing the connections between environmental change (through urban development) and financial credit is only the first step to understanding challenges in sustainable communities. They argue the links between finance, insurance and property risks from catastrophic natural events require a new, focused area for study by both universities and coastal cities—in other words, the creation of “financial ecology,” a field that will provide a better understanding of financial systems as these systems interact with nature.

Read “Financial credit drives urban land-use change in the United States” at the Anthropocene website. The paper is available at no cost from the journal’s webpage until late March 2018, by subscription to the journal or from any of the authors.