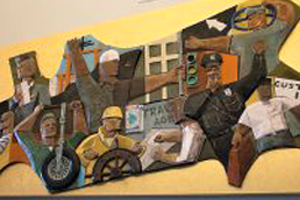 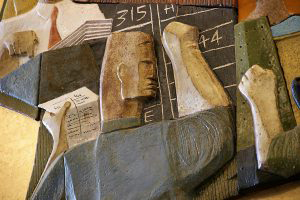 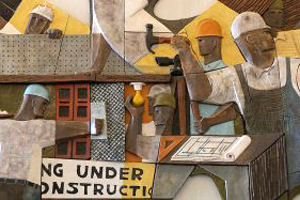 The award will be presented to William Puette, CLEAR director, along with Docomomo US–Hawaiʻi and Bank of Hawaiʻi, during the Preservation Honor Awards Ceremony on May 23.

CLEAR helped raise approximately $43,000 for the restoration and installation, and secured wall space in the James and Abigail Campbell Library to display the murals. The murals were installed in December 2017.

“The murals were meticulously restored and relocated to a meaningful and publicly accessible location,” noted Kirsten Faulkner, Historic Hawaiʻi executive director, in a letter to Puette. “We congratulate you and your exemplary preservation efforts.”

The award caps off the multi-year mural restoration project. Enomoto’s five murals, which depict Hawaiʻi labor scenes in the early 1960s, hung above teller stations at the Bank of Hawaiʻi branch on Kapahulu Avenue until 2015 when the location was sold.

At Bank of Hawaiʻi’s request, Docomomo US–Hawaiʻi agreed to warehouse the large pieces while it searched for their new home. Docomomo US is a non-profit group dedicated to understanding, preserving and documenting the modern movement in planning, architecture, landscapes and public art.