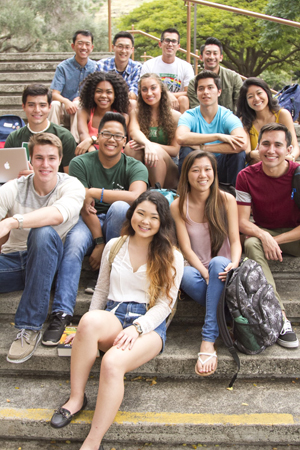 The University of Hawaiʻi at Mānoa is ranked number 8 in the nation for Most Diverse U.S. Colleges. The list, compiled by Best Value Schools, placed the top 45 schools based on racial breakdown of each university combined with their Equity Index Score (EIS) or the likelihood of encountering people from different races or ethnic groups.

With an EIS of 0.72, UH Mānoa was chosen for its diverse student makeup representing more than 100 different countries, as well as its spirit of aloha that embodies the campus culture making students of different cultures feel welcomed.

According to the website, an EIS score of 1 would indicate a 100 percent probability that two people chosen at random would be of different race or ethnic group and a score of 0 would represent a 0 percent probability. The score was calculated using a formula created by U.S. News and World Report.

This latest ranking follows UH Mānoa’s placement as number 6 for Best Ethnic Diversity (National Universities) and as the top law school in the country for diversity in the 2018 U.S. News and World Report’s Best College Rankings.

Best Value Schools is a website dedicated to researching thousands of colleges and universities and compiling various lists to help prospective college students find the best college for the best price to maximize their student experience.