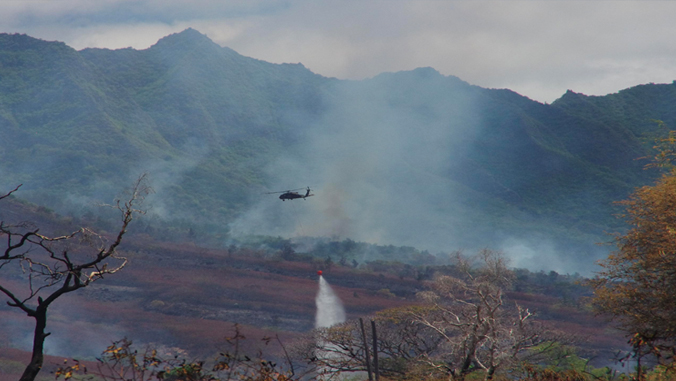 The first study linking climate change to an increased probability of wildfires in Hawaiʻi also weighs the increased risks facing tropical regions around the world, according to University of Hawaiʻi at Mānoa researcher Clay Trauernicht.

Based on changes in rainfall and temperature due to climate change, the annual risk of wildfire could increase up to 375 percent for parts of Hawaiʻi Island, the analysis shows.

Lead researcher Trauernicht, of the College of Tropical Agriculture and Human Resources Department of Natural Resources and Environmental Management, tracked the “footprints” of historical fires on Hawaiʻi Island. His research shows how vegetation, ignition frequency and climate contribute to wildfire probability.

“The increased risk of fire stems from drought conditions due to low rainfall, as well as increased rainfall in the months prior to drought,” Trauernicht said. “This is because wet conditions mean greater growth of non-native grasses, which are the greatest fuel for wildfires in Hawaiʻi. Wet summer weather, combined with dry winter conditions, is characteristic of El Niño conditions and this winter looks likely to be another El Niño.”

Most of this change is anticipated to happen within the next several decades.

“Conditions for fire are likely to worsen significantly by mid-century,” said Trauernicht. “The analysis also confirms patterns we’re already seeing in Hawaiʻi. High rainfall in the 2017–2018 winter, followed by late-summer drought, contributed to nearly 30,000 acres burning across the state this August.”

Read the full article at the College of Tropical Agriculture and Human Resources website or download the paper published in Science of the Total Environment.