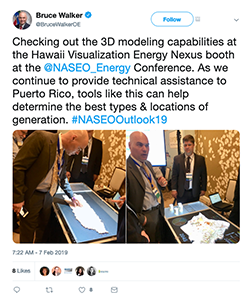 An interactive 3D projection-mapped model of Oʻahu developed by University of Hawaiʻi at Mānoa students, showing layers of data for the state’s plan to run on 100-percent renewable energy by 2045, generated lots of buzz at a national energy conference in February in Washington, D.C.

“A dozen or more states were interested in adopting the technology,” said Chris Yunker, energy systems and planning branch manager for the Hawaiʻi State Energy Office. “Assistant Secretary of the Office of Electricity Bruce Walker had come by and he showed interest for the [Department of Energy] to adopt the technology itself.”

Walker tweeted from the 2019 NASEO Energy Policy Outlook Conference in February, “Checking out the 3D modeling capabilities at the Hawaii Visualization Energy Nexus booth at the @NASEO_Energy Conference. As we continue to provide technical assistance to Puerto Rico, tools like this can help determine the best types and locations of generation. #NASEOOutlook19”

The student-built project is called the Hawaiʻi Advanced Visualization Environmental Nexus (HAVEN). It can show land ownership, and photovoltaic and windmill buildouts over time, among other data projected across a topographical map of the island of Oʻahu. The team has 3D models for data visualization on other islands in the state, too.

HAVEN was developed by a team of UH Mānoa students at the Laboratory for Advanced Visualization and Applications (LAVA), under the supervision of LAVA Director Jason Leigh.

“It was done not just by me, so that’s an important thing. It’s a collaborative effort,” said HAVEN main developer James Hutchison, a UH Mānoa computer science undergraduate student. “It’s great. I’m definitely proud of it.”

HAVEN supports thousands of pages of data from the Hawaiʻi State Energy Office and Hawaiian Electric Industries. It was developed to help decision makers and stakeholders with the energy planning process, with funding support from the state energy office, Department of Energy and the Academy for Creative Media System.

“It would make me feel really good that I would have a hand in the future of renewable energy and trying to get away from coal,” said graduate student Ryan Theriot, who did the open-source visualization coding for HAVEN.

Now that the the National Renewable Energy Laboratory has also shown interest in HAVEN, this UH student invention could end up having a significant impact across the nation and possibly beyond.