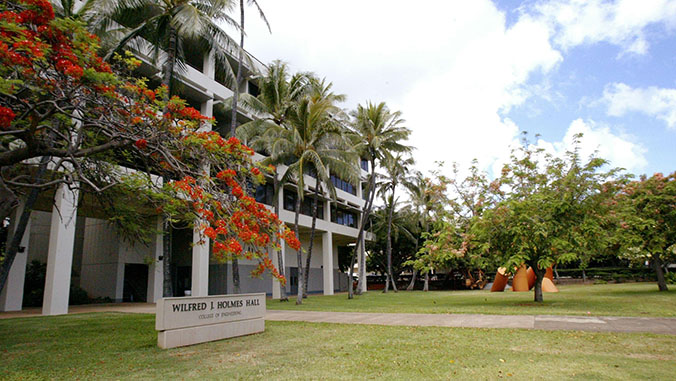 A grassroots outreach campaign demonstrating the day-to-day practical uses of engineering geared towards high school and lower grade students, helped propel student enrollment at the University of Hawaiʻi at Mānoa College of Engineering.

Much of the college’s success stems from Choi’s vision to bring practical engineering concepts to high school career day-type demonstrations. The introduction of K–12 robotics in 1999, the use of drones and robotics competitions such as the First Robotics Competition being held at the UH Mānoa Stan Sheriff Center in March engaged and excited students.

In its infancy stage, Choi and other College of Engineering representatives made presentations to high school seniors. The next year, juniors were included. Eventually, students in middle and elementary schools were also shown interesting and practical applications of how engineering is incorporated into daily living.

UH engineering graduates also played a key role in expanding the college. Electrical engineer-turned-teacher Glenn Lee, could have enjoyed a more lucrative career, but instead, he chose to switch gears to make a difference in the lives of hundreds of high school students.

Twenty-four years ago, Lee took a job at Waialua High and Intermediate School, a small rural school on Oʻahu’s north shore, as a way to help pay his way through business school. He was the teacher who took on the task of K–12 robotics and the rest, is history. Over the years, he built a fiercely competitive robotics team that continually competes on the international level and produces students who go on to major in engineering.

Successes like these help maintain the interest—and steady upward enrollment—of the College of Engineering.

*Enrollment increases dramatically due to the pre-engineering program move from College of Arts and Sciences to the College of Engineering.