Before Sasha Yamada graduated as one of several valedictorians from Kahuku High School in 2015, she envisioned herself at a mainland university. However, as fate would have it, Yamada was the recipient of the prestigious University of Hawaiʻi Regents’ Scholarship—a full tuition waiver for four years of undergraduate study awarded to only 20 high school seniors statewide annually for their outstanding academic achievement. She made the decision to attend UH Mānoa and see where it would take her.

Fast forward four years later and Yamada is set to graduate with a degree in electrical engineering with a specialization in electrophysics on May 11, at UH Mānoa’s commencement ceremony—the first in her family to graduate from college. And with an overall 3.94/4.0 GPA to boot.

“I didn’t really think about what that meant so much when I was just applying but being at the point where I’m graduating next week, I think that it’s probably hit me a little bit more as wow, this is pretty significant and I’m very proud to be where I am today,” said Yamada.

Within Yamada’s first month at UH Mānoa, she joined the liquid metal electronics team and quickly distinguished herself as a dedicated student and researcher, exceeding all expectations for a first-year student. Her motivation and technical competence allowed her to make significant contributions to the research team, including making her one of the youngest students advised by Electrical Engineering Professor Wayne Shiroma to first-author a conference paper.

“There’s a mentality that people don’t want to stay here for college; that you should go away and see the world,” said Yamada. “Once I got to UH I was gung ho about maximizing the opportunities here and taking advantage of all of that UH has to offer and all that my professors would allow me to do. I made sure I made good use of my time.”

Throughout her tenure at UH Mānoa, Yamada dedicated her summers to pursuing state-of-the-art technical experiences. In 2016, she was selected as a Nakatani Research and International Experiences for Students Fellow and spent 12 weeks doing nanomaterials research at the University of Tokyo. The following summer, she returned to Japan as a visiting undergraduate researcher at Tokyo University of Agriculture and Technology, where she simulated optical confinement in silicon waveguides in the Shimizu Laboratory. And in 2018, she interned in the Antenna Systems Department at The Aerospace Corporation in El Segundo, California, where she designed a wideband antenna for a radio frequency (RF)-photonic transducer, and performed comprehensive literature reviews about deployable antennas and the effect of reentry plasma sheaths on RF communications.

“She has shown an aptitude for research, and proven herself to be a leader and a mentor,” said Ohta. “Sasha is an exceptional student with great potential.”

Likewise Yamada shares similar sentiments saying, “College has definitely enabled me to do as much as I have because I found great advisors that saw my potential and saw that I was motivated. They encouraged me to do research in areas I didn’t think I’d be interested in and pushed me in ways I wouldn’t have on my own.”

Along with consistently excelling in her academics, Yamada has engaged in impactful extracurricular activities, including her commitment to service within the local engineering community, serving as chair of the Institute of Electrical and Electronics Engineers student branch and through the electrical engineering honor society, Eta Kappa Nu, provided free weekly tutoring services for lower division electrical engineering, math and physics courses during her junior year.

Her post-graduation plans include leaving at the end of June to attend the University of Illinois Urbana-Champaign to earn a master’s and doctorate in electrical engineering, the field that has captivated and challenged her for the past four years. And once again, her hard work has earned her a fully-funded National Science Foundation Graduate Research Fellowship for three years. Of the 2,050 awardees, Yamada was one of 56 electrical engineering students recognized as a national top scholar in science in engineering.

Yamada’s ultimate goal is to stay in academia and become a professor, continuing to promote the involvement of women and members of other underrepresented groups in STEM and perhaps landing her back at UH Mānoa. 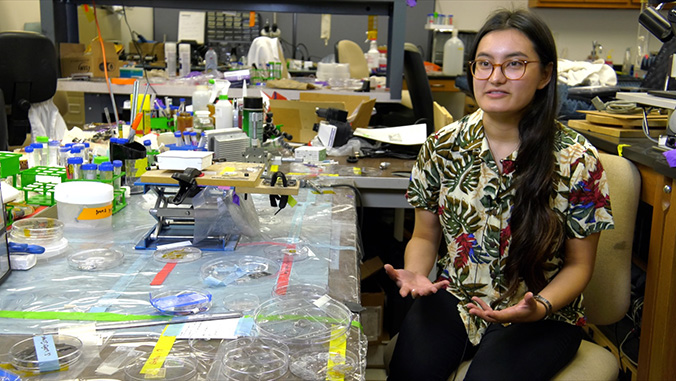