Fourteen students from Honolulu, Kapiʻolani and Windward Community Colleges and the University of Hawaiʻi at Mānoa, from the Project Imua Mission 6 team, have been recognized for rocketry excellence.

The UH team launched its rocket and payload in Alabama in the April 2019 NASA Student Launch competition. UH won the Rookie Award, given to the top new team in the competition.

The Project Imua team also finished in the top 10 out of 45 teams in the college/university division, at No. 9. Vanderbilt University, the University of North Carolina at Charlotte and the University of Akron, Ohio, were the top three finishers. 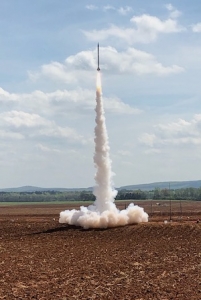 “The real-life engineering skills and confidence that our students developed in this challenging competition will launch them onward to exciting careers,” said Project Imua Manager Joe Ciotti, a professor at Windward Community College. “For them now, not even the sky is the limit.”

This year’s challenge, hosted by NASA’s Marshall Space Flight Center in Huntsville, Alabama, tasked student teams to propose, design, build and test a reusable rocket with a payload. The rocket had to reach a team-selected altitude between 4,000 and 5,500 feet. Once reaching its highest point, the rocket deployed a recovery system and landed safely. The payload had to be a drone or rover that autonomously deployed from the rocket after landing. NASA engineers face similar questions as they design the Space Launch System rocket to send astronauts and payloads to the Moon.