Two University of Hawaiʻi Community College students and their advisor spent more than a week at the NASA Wallops Flight Facility in Virginia to prepare their scientific payload for a space launch in August. They are part of a team of Project Imua Mission 10 students who have been collaborating on this project for months.

Windward CC students designed and built a small, light-weight rocket that will convert camphor to gas to propel its release into space at the peak of the NASA rocket’s flight. The Honolulu CC team designed a camera system and inertial measurement devices to monitor the motion of the small experimental rocket. The entire payload is less than a foot long, weighs less than 15 pounds and is almost entirely encased in aluminum.

After the payload failed an initial power test, Windward CC student Nikki Arakawa, the rocket team lead, had to rewire the interface and power connections. Following another successful power test, Arakawa was able to turn the payload over to the Wallops integration team for placement in the rocket to be launched in August.

Arakawa, who graduated with her bachelor’s degree in electrical engineering from UH Mānoa in May 2022 and was recently part of an award-winning rocketry team, said she is now considering going to graduate school to study aerospace mechanical engineering. 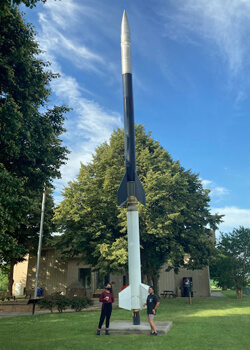 “I only just had a chance to start trying out all these things, and it just feels like—gosh I just wish I started this a lot earlier,” she said.

While at NASA, D’Elle Martin, the team lead for Honolulu CC, ran checks on the various systems, including the video capture units.

“What I realized throughout this project and through my previous project with Honolulu Community College—through both electronics programming and model rocketry—is that even though you might have a major that may not be necessarily towards engineering, you can still learn a lot about working in a team, but also different pathways to STEM careers,” Martin said.

The current UH Mānoa architecture student said the Project Imua experience has inspired her to consider the nascent specialization of space architecture.

Arakawa and Martin were accompanied by mentor Jacob Hudson from Windward CC. Mentor Shidong Kan, a Honolulu CC associate professor of physics, will escort four students to the NASA facility for final integration of the payload onto the rocket and launch, which is tentatively scheduled for August 9.

Mission 10 is funded through the Hawaiʻi Space Grant Consortium and represents the fourth time that a UH Project Imua payload will be launched into outer space.

The first Project Imua payload was launched from Wallops in 2015.