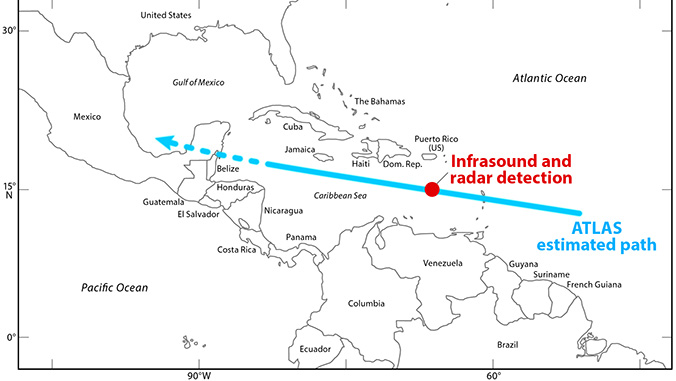 For the first time, astronomers at the University of Hawaiʻi have demonstrated that the UH ATLAS (Asteroid Terrestrial-impact Last Alert System) and Pan-STARRS (Panoramic Survey Telescope and Rapid Response System) survey telescopes can provide sufficient warning to move people away from the impact site of an incoming asteroid. The telescopes detected a small asteroid prior to its entering the Earth’s atmosphere near Puerto Rico on the morning of June 22, 2019.

The 4-meter diameter asteroid, which is about the size of a car and named 2019 MO, was observed four times in a span of 30 minutes by the ATLAS facility on Mauna Loa on Hawaiʻi Island, at around midnight Hawaiʻi time on the morning of Saturday, June 22. At that point, the asteroid was only 500,000 km from Earth—1.3 times the distance to the Moon. These initial observations were assessed by the NASA Jet Propulsion Laboratory’s (JPL) Scout impact analysis software, and the asteroid was given a modest impact rating of 2 (a rating of 4 is “likely”). However, JPL’s Davide Farnocchia noted a possible match with an atmospheric infrasound detection over Puerto Rico about 12 hours later, and he asked if the community could search for additional observations.

Luckily, the Pan-STARRS 2 (PS2) telescope on Haleakalā was operating at the same time, and two hours prior to the ATLAS observations had imaged the part of the sky where 2019 MO should have been seen. The asteroid was located on a part of the PS2 camera that is not fully operational, but PS2 scientists Robert Weryk and Mark Huber at the UH Institute for Astronomy and Marco Micheli at the European Space Agency were able to analyze these PS2 images and find the asteroid.

With these additional PS2 observations, the asteroid’s entry path prediction improved significantly, and new calculations by the Scout software increased the impact rating to 4 or “likely.” The improved orbit calculation also matched the infrasound detection with very high likelihood. The Nexrad weather radar in San Juan, Puerto Rico, also detected 2019 MO as it burnt up in the atmosphere, and pinpointed the entry location over the ocean, about 380 km south of San Juan, closely corresponding to the infrasound location.

ATLAS consists of two telescopes, 100 miles apart, with one on Mauna Loa, Hawaiʻi Island, and one on Haleakalā, Maui. They automatically scan the whole sky every two nights, looking in all directions and see asteroids before they can hit the Earth. ATLAS currently discovers about 100 asteroids with diameters bigger than 30 meters every year.

Scientists estimate that asteroid 2019 MO was much smaller, only about 4 meters (13 feet) across. An asteroid that small would likely burn up entirely as it entered Earth’s atmosphere. The ATLAS telescopes can detect even such small objects about half a day before they arrive. It will find larger objects, like the one that exploded over Chelyabinsk, Russia, in 2013, a few days before they impact. That asteroid was about 20 meters across or the size of a house.

ATLAS and Pan-STARRS are funded by grants from the NASA Near-Earth Object Observations program.

More about Pan-STARRS at UH News.