Jon Osorio, dean of the University of Hawaiʻi at Mānoa Hawaiʻinuiākea School of Hawaiian Knowledge, received a lifetime achievement award in 2019, and it was not for his distinguished work in academia. Osorio was honored for his contributions to Hawaiʻi’s music and recording industry by the Hawaiʻi Academy of Recording Arts at an October 27 event at the Japanese Cultural Center of Hawaiʻi in Mōʻiliʻili. 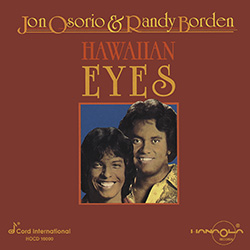 Osorio was born and raised in Hilo, Hawaiʻi and graduated from Kamehameha Schools in 1969. He fell in love with the guitar his junior year of high school and that passion for music eventually led him to fellow musician Randy Borden. They teamed up in 1974 to form J&R Inc. and eventually became Jon & Randy. They were part of the “Hawaiian Renaissance” in local music scene that included groups like Cecilio and Kapono, Olomana, Country Comfort and Keola and Kapono Beamer. Their first album as Jon & Randy, Hawaiian Eyes, received eight Nā Hōkū Hanohano award nominations in 1981, winning song of the year for “Hawaiian Eyes.”

“With the music it was always just, no matter what we were going through, and we were poor a lot of the years we played together, but no matter how bad it could get, somehow whenever we were singing, there was always something so pure and amazing about those moments, that I’m just grateful for them,” said Osorio about his partnership with Borden.

“I think the best thing about the recognition is that I would belong to the same space and the same place with other people who have done so much,” said Osorio. “I think that more than anything else I find it really humbling.”

Those moments included playing with some of the biggest names in Hawaiian music and opening for national stars like Natalie Cole, Kenny Loggins and the Jacksons. Borden moved back to the continental United States in 1982, and in 1984, Osorio began an academic life that eventually earned him a PhD in history at UH Mānoa, followed by a teaching career at Kapiʻolani Community College and then UH Mānoa Kamakakūokalani Center for Hawaiian Studies and ultimately, the dean of Hawaiʻinuiākea. Osorio says through it all, music has, and will always be, part of his life.

“Music, for us as Kanaka Maoli, composing, performing, singing, hula, these are the things that have kept us alive as a people through some very difficult times,” said Osorio. “We’re seeing the explosion of that, the exponential expression of that, upon the mauna, Maunakea, and in so many other places. Where Hawaiians have a political presence, hula is there and mele is there.”

Along with Osorio, Noland “Brother Noland” Conjugacion, Momi Bee Kahawaiolaʻa and Kawaikapuaokalani Hewett were were also honored with 2019 Lifetime Achievement Awards by the Hawaiʻi Academy of Recording Arts.