Many helping hands joined together to assist the staff of the University of Hawaiʻi at Mānoa’s Sinclair Library move their entire collection of books and artifacts to Hamilton Library. Among the materials transported are 500 of the best moving images of Hawaiʻi and the Pacific, an extensive music collection and a recording of Martin Luther King Jr. speaking at Andrews Amphitheater.

The move took place over the last year, beginning with the music print collection, and will soon continue with the relocation of other materials, such as journals and serials.

“For the dedicated librarians and staff, many of whom spent most of their careers at UH in the Sinclair Library, it was home. They were a tight knit group who worked tirelessly to support the students,” said University Librarian Clement Guthro. “While Sinclair is no more, these individuals, now in Hamilton, bring their same level of dedication and commitment to students and faculty. They enrich the Hamilton family.” 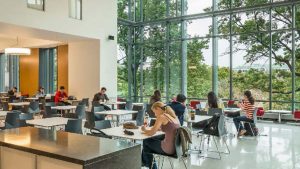 The transition is part of preparations for the conversion of Sinclair Library into a student success center. The success center’s funding was approved in the 2019–2020 fiscal year, assisting in the future establishment of study and collaboration spaces for students in addition to academic advising and tutoring.

Sinclair Library became a more student-focused center in 2006. To commemorate their 50th anniversary, Sinclair created and collaborated with the UH Mānoa Student Success Center, which then marked the start of 24/7 access of the library for the late-night studiers.

On December 20, 2019, Sinclair officially closed their doors as a library service. The transformation into a Student Success Center continues.

Ideas for the creation of Sinclair Library began in 1953 to provide more space for the University Library Collection that was housed in George Hall Addition. In 1956, Sinclair Library was completed and created a study space for students while storing the ever-growing University Library Collection. However, due to the growing collection, Hamilton Library was constructed and half of the collection was then carried over to Hamilton.

In the 80s and 90s, Sinclair became more digitized. With the dedication of The Harry C. & Nee Chang Wong Audiovisual Center on the third floor, the installation of the Hawaiʻi Interactive Television System’s transmission equipment, the establishment of the Computerized Learning and Information Center and the creation of a university statewide computer system, Sinclair began to grow rapidly through technology and built interisland connections with all UH system campuses.

The following two decades experienced a surge in technology. In 2001, the Web gateway Hawaii Voyager was developed, hosting an online catalog with records of all UH System Libraries, Bishop Museum Library and Archives, and Hawaiʻi Medical Library and Hawaiʻi State Archives. In 2010, older videos and tapes that focused on Hawaiian and Pacific collections were converted into digital recordings and made accessible on streaming services. In the following year, a photovoltaic system was incorporated, providing clean energy power to Sinclair. The library also launched a new, updated computer system in 2019.