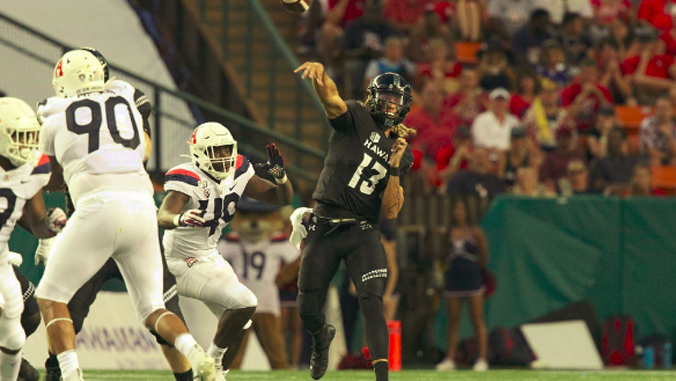 The Tennessee Titans are getting another quarterback with Hawaiʻi ties.

Former University of Hawaiʻi at Mānoa quarterback Cole McDonald was drafted in the seventh round of the 2020 NFL draft by the Tennessee Titans.

McDonald, the 224th pick, completed his redshirt junior season for the Rainbow Warriors in 2019 ranked No. 3 nationally in passing yards with 4,135, No. 6 in total offense with 322.7 yards per game and No. 8 in passing touchdowns with 33.

The native of La Mirada, Calif., led the Rainbow Warriors to a 10-5 record, including a Mountain West Conference (MW) West Division title and a victory in the SoFi Hawaiʻi Bowl over BYU, 38-34. McDonald completed 28-of-46 passes for 493 yards and four touchdowns, earning him the SoFi Hawaiʻi Bowl MVP.

In 2015, the Titans drafted Saint Louis School standout Marcus Mariota. He was Tennessee’s starting quarterback until partway through this past season. Mariota left for the Raiders in the off season.