More than 40 years ago, the first Asian Pacific American Heritage Week (APAHW) was celebrated May 4–10, 1979, recognizing the contributions of Asian and Pacific Americans to the U.S. The University of Hawaiʻi at Mānoa Library’s Hawaiʻi Congressional Papers Collection houses historic material from the first APAHW including documents that reveal the integral role Hawaiʻi’s Congressional Senators Daniel K. Inouye and Spark Matsunaga played in establishing the designated week.

The collection includes a letter from Rep. Frank Horton and Rep. Norman Mineta, inviting Inouye and Matsunaga to propose a Senate resolution designating the first APAHW.

Inouye and Matsunaga agreed to their invitation and introduced S.Res.72 on July 19, 1977. The following year, H.J.Res.1007 authorized and requested the President to proclaim the 7-day period beginning on May 4, 1979, as “Asian/Pacific American Heritage Week.” It passed both in the House and Senate and was signed by President Jimmy Carter on October 5, 1978.

The period for the first APAHW was selected to commemorate the 136th anniversary of the arrival of the first Japanese immigrants in the U.S. on May 7, 1979, and the 110th anniversary of “Golden Spike Day,” honoring the contributions of Chinese Americans for the construction of the Transcontinental Railroad on May 10, 1979. 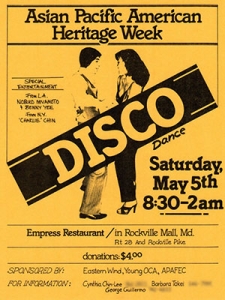 Celebrations were held throughout the country in the form of events such as film screenings, martial arts and ikebana demonstrations, a wayang kulit (Indonesian puppet theatre) performance, poetry readings, a broadcast of interviews, a disco and a fun run. There were policy events as well, including one from then-Rep. Daniel Akaka who gave a talk on education and the Native Hawaiian community.

Asian Pacific American Heritage Week was annually proclaimed by President George H. W. Bush, and in 1990 was extended to an entire month.

This year, Asian Pacific American Heritage Month celebrations are all happening online due to COVID-19. However, just like 1979, there are film screenings, panel discussions, performances and, of course, dance parties.

The Senator Daniel K. Inouye Papers and the Senator Spark M. Matsunaga Papers are part of the Hawaiʻi Congressional Papers Collection in UH Mānoa Library’s University Archives and Manuscripts Department. They are available for research.