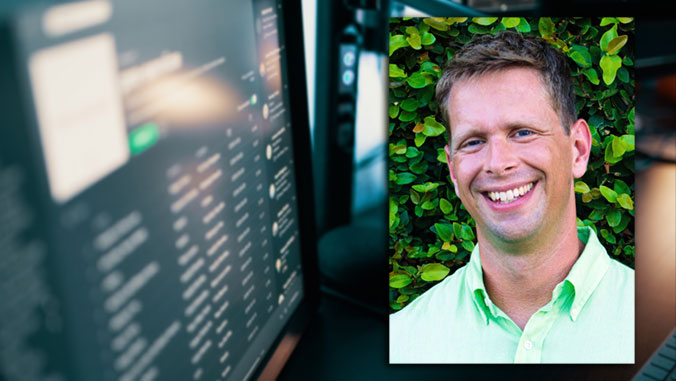 A game-changing new technology that could impact aerospace and electronics manufacturers is being developed at the University of Hawaiʻi at Mānoa’s College of Engineering, and the project received a big boost thanks to a three-year, $486,000 research grant from the Air Force Office of Scientific Research (AFOSR).

Joseph Brown, a mechanical engineering assistant professor and the project’s principal investigator (PI), said the award came as the result of a research proposal process that required more than two years of outreach to AFOSR, and is his first grant as a single PI.

“The fundamental understanding developed in this work has the long-term potential to revolutionize aircraft, spacecraft and sensor fabrication processes by enabling adaptability and increased speed and automation of assembly processes,” Brown said. “Furthermore, interlocking adhesive metamaterial surfaces may provide a pathway to better and more adaptable designs for high service temperatures and high-temperature cycling, which are needed for adaptable and robust designs for hypersonic systems.”

The objective of Brown’s proposal, “Emergent Behavior of Interlocking Mechanical Metamaterials,” is to perform fundamental research aimed at understanding principles of 3D geometric nonlinearity within mechanical interlocking systems, focusing on structures assembled and operated on an extremely small scale.

The research concerns metamaterials, which are materials that use 2D or 3D patterns of repeated designs to achieve new properties not possible in unpatterned materials. In this case, the team will build from Brown’s earlier work on the topic of mechanical interlocking joints to create metamaterials that can be used to replace chemical adhesives with mechanical joints, behaving similar to Velcro but for high-performance material surfaces and with potentially much stronger bonds.

Geometric nonlinearity concerns situations in which the “small angle approximation” cannot be used in mechanical modeling. It is used widely to simplify engineering mathematics, but cannot be used to consider the bending of a hair, rope, piece of paper, or in the case of this grant, thin layers of engineering materials such as metals or polymers.

Anticipated research outcomes include a set of analytical and numerical simulation tools, and fabrication processes, that can be used to design and manufacture adhesive metamaterial surfaces, to be shared with the engineering community via research publications. Initial analysis indicates that surface bonding forces comparable to those of chemical adhesives can be obtained with interlocking mechanical metamaterials. As part of the research, the team will use analytical and numerical modeling, verifying models with experimentation and identifying model systems for scalable manufacturing once project discoveries are implemented.

AFOSR, based in Arlington, Virginia, supports Air Force goals of control and maximum utilization of air, space and cyberspace. AFOSR accomplishes its mission through investing in basic research efforts for the Air Force in relevant scientific areas.