A recently discovered protein structure that controls the protein’s function and influences human health has been explained by University of Hawaiʻi at Mānoa researchers. Their findings were published in a new study, “Topological Twists in Nature,” by Trends in Biomedical Sciences. 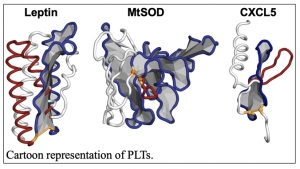 Topology refers to the way parts or components are arranged. The research by Department of Chemistry Assistant Professor Ellinor Haglund and graduate student Jennifer Michelle Simien involves the Pierced Lasso Topology (PLT), which was discovered by Haglund within the past decade. PLTs are a type of “knot-like” structure found in some disulfide-bonded proteins. Disulfide bonds play a critical role for protein stability and biological activity, and they allow regulation by environmental factors such as oxidizing and reducing environments.

Haglund and Simien concluded that PLTs were created in nature to control biological activity and possibly to protect against the degradation of proteins within living organisms.

“In this review, we investigate the correlation between biological processes and PLT formation. We discovered that the association between disulfide bonds, PLTs and biological function is an introduction of a new function,” Haglund said. “Future research will focus on answering these questions in more detail.”

The role of threaded topologies in nature have been disregarded and only introduced in proteins within the past 40 years. Similarly, knotted topologies introduced by human innovation impacts daily existence. Knots have been employed to help in grouping materials (netting), moving objects (wrapping) and art. The same is true for PLTs, which are found in belts, crochet and lifting straps, where topology is what makes it functional. PLTs, therefore, hold an untapped potential in everyday life.

This work is an example of UH Mānoa’s goal of Excellence in Research (PDF), one of four goals identified in the 2015–25 Strategic Plan (PDF), updated in December 2020.