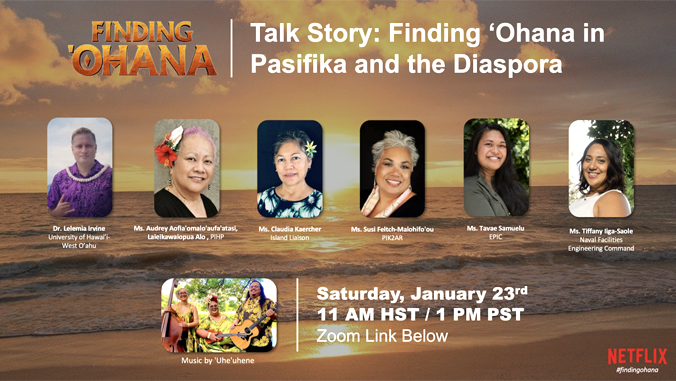 A recording of “Talk Story: Finding ʻOhana in Pasifika and the Diaspora,” an event facilitated by University of Hawaiʻi–West Oʻahu Assistant Professor J. Lelemia Irvine, is now available to view on Facebook. The event was sponsored by Netflix and held in association with the release of the original film by the popular streaming service.

During the January event, Irvine conducted a conversation with Pacific Islander leaders about the importance of storytelling in our communities.

The family-friendly action-comedy Finding ʻOhana premiered on January 29 on Netflix. The movie is set during the summer in rural Oʻahu and tells the story of two Brooklyn-raised siblings.

“These kids return home (to Hawaiʻi) and get in touch with their Hawaiian heritage and roots,” Irvine said. “The main character, Pili, aspires to become a Hawaiian scientist when she grows up.”

According to Netflix’s description of the film, their summer takes an exciting turn “when a journal pointing to long-lost treasure sets them on an epic adventure.”

“The purpose of this talk story sponsored by Netflix is to amplify Native Hawaiian and Pacific Islander community voices,” Irvine said.