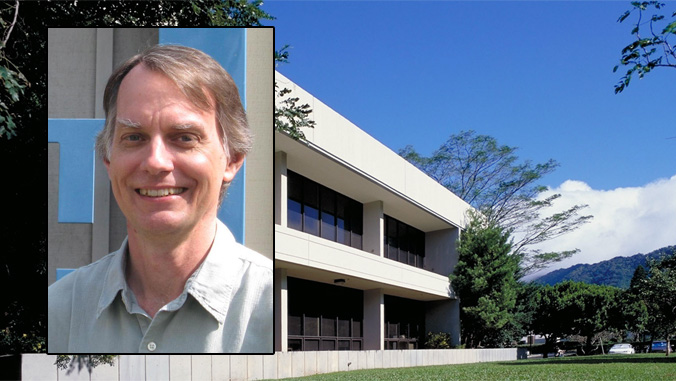 The incoming director of the University of Hawaiʻi Institute for Astronomy (IfA), Doug Simons has a set of priorities that he calls the “three pillars”—ramping up research, expanding technology development and retaining IfA’s world-class education. Simons’ appointment as the leader of one of the world’s premier astronomy programs became official at the Board of Regents April 15 meeting.

“Over many years UH has sustained phenomenal adaptive optics and infrared array development programs. That technology helped to build astronomy world-wide,” he said. “It’s being used on Maunakea and around the world and we look to continue to build on that success.”

The veteran Hawaiʻi Island astronomer is also focused on renewal of UH’s master lease for Maunakea which is set to expire in 2033. The university is seeking to continue its stewardship of the revered site that holds cultural, historic and environmental significance and also provides opportunities to carry out critical research.

“The science impact of Maunakea astronomy is consistently top ranked worldwide. In many ways ensuring a future for Hawaiʻi astronomy helps leverage a bright future for astronomy globally.”

Simons also has an unwavering vision of merging Hawaiian knowledge and traditions with contemporary astronomy and has been a champion of community engagement and astronomy education on Hawaiʻi Island and across the state. He has worked alongside UH Hilo Hawaiian language expert Larry Kimura to pinpoint extraordinary similarities between the ancient Hawaiian creation chant, the Kumulipo and the Big Bang theory. In their presentation, The Physics of Pō and the Pō of Physics, the two scholars articulate how similar Hawaiian and Western ideologies are in explaining how the Universe was formed.

“Hawaiʻi is uniquely positioned to be an example for the world that Indigenous ways of knowing can enhance contemporary science,” Simons said.

He helped establish A Hua He Inoa, a program where Hawaiian speaking students and educators work with Hawaiʻi-based astronomers to create names in ʻōlelo Hawaiʻi (Hawaiian language) for astronomical discoveries made in Hawaiʻi.

Simons also aims to expand opportunities for IfA students to train at the observatories on Maunakea on Hawaiʻi Island and Haleakalā on Maui. Simons earned his PhD from IfA in 1990 and has worked on Maunakea since, most recently as the Canada-France-Hawaiʻi Telescope executive director since 2012 and the Gemini Observatory director from 2006–11. He attributes access to telescopes during his days as an IfA graduate student as an important part of his success in the field of astronomy.

“The experience of being able to observe on Maunakea, to work with engineers, I was so well prepared to be a professional astronomer when I graduated.”

Consistent community and educational outreach is vital for Simons, especially among Hawaiʻi’s keiki. He led the launch of the Maunakea Scholars program, where public high school students can apply for observing time across the Maunakea Observatories. His mission is to continue to connect and inspire youngsters about astronomy with the hope they will realize their future aspirations at IfA.

“Hawaiʻi astronomy has been my life’s work since I arrived at UH in 1986 and sat in my first class. This is a very personal journey that I hope will lead to great outcomes for our community and Hawaiʻi astronomy,” said Simons.