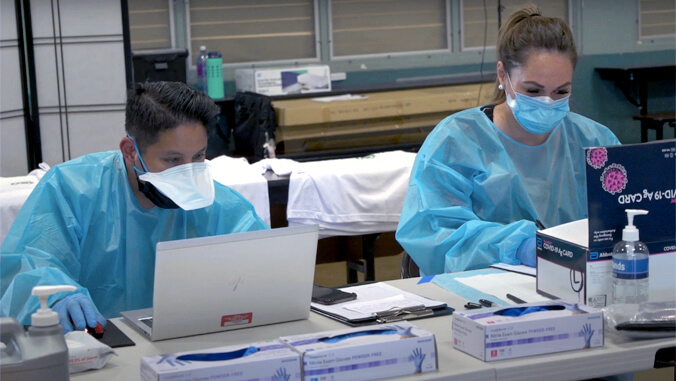 The National Institutes of Health (NIH) has awarded nearly $3 million to a University of Hawaiʻi at Mānoa-led project expanding COVID-19 testing in schools statewide. The funding supports the Pacific Alliance Against COVID-19 (PAAC) pilot project, which establishes a novel protocol for rapid testing at schools, collecting behavioral data, and disseminating information on mitigation procedures and vaccination.

The consortium effort is led by UH Mānoa’s John A. Burns School of Medicine (JABSOM), College of Social Sciences and the Accountable Healthcare Alliance of Rural Oʻahu (AHARO).

“PAAC’s goal is to empower educators, students and the community-at-large with education tools and connections with public health services, including those provided by the AHARO Community Health Centers,” said Associate Professor in Pediatrics and co-investigator May Okihiro. “The plan is for free antigen testing of school teachers and staff to be expanded to schools in Waiʻanae and Waimānalo on Oʻahu, Hāmākua-Kohala and Hilo on Hawaiʻi Island, and on Molokaʻi.”

“About 87% of participants reported their participation led to a better understanding of the need for antigen testing, and 52% were more likely to be vaccinated as a result of the pilot testing and education program,” said project co-investigator Ruben Juarez, a professor of economics and research fellow in the UH Economic Research Organization in the College of Social Sciences.

“The project reaffirms that schools are an asset in preventing the spread of COVID-19 into our communities,” added project co-investigator Alika Maunakea, an associate professor in JABSOM’s Department of Anatomy, Biochemistry & Physiology and the Institute for Biogenesis Research. 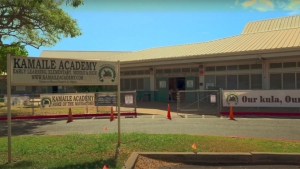 UH Mānoa is one of 15 institutions to receive a NIH award through the RADx-Underserved Populations (RADx-UP) Safe Return to School Diagnostic Testing initiative, a part of the Rapid Acceleration of Diagnostics (RADx) initiative.

“The new awards reaffirm NIH’s commitment to use evidence-based research to inform policy makers of the safest ways to return to schools in vulnerable and underserved communities,” said Eliseo J. Pérez-Stable, director of NIH’s National Institute on Minority Health and Health Disparities and co-chair of the RADx-UP program.

The initiative will specifically focus on schools with racially and ethnically diverse populations, including African-Americans, Latinos/Latinas, Native Hawaiians and other Pacific Islanders and Asian Americans. It will also impact socio-economically disadvantaged populations and school districts where many students are receiving free or reduced price lunch; and students with medical complexities and developmental disabilities.