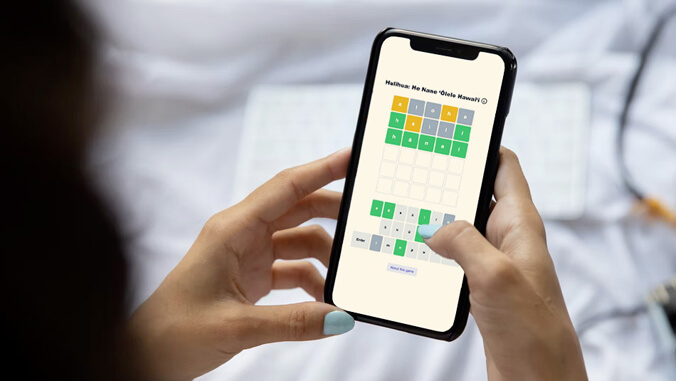 Just in time for the start of Mahina ʻŌlelo Hawaiʻi (month of the Hawaiian language), University of Hawaiʻi Maui College Assistant Professor of Music Keola Donaghy has released a Hawaiian language version of the popular Wordle online game.

The Hawaiian game is named “Hulihua” and can be found at http://hulihua.net. It is played on the internet and users do not need to download a program to play. One new word is provided to players each day. Like Wordle, players try to identify a five-letter word and receive hints from the game that help them solve it.

“I thank Noelani Arista of McGill University in Canada for pointing me to Aidan and his work. Aidan helped me tremendously with the modifications to his code to create and deploy an ʻōlelo Hawaiʻi version of Wordle,” Donaghy said. “There are several other Indigenous languages that have their own versions of this game and many more are under development. The fact that it happened so close to the start of Mahina ʻŌlelo Hawaiʻi makes it even more special.”

In 2012, February was declared to be Mahina ʻŌlelo Hawaiʻi to celebrate and encourage the use of the Hawaiian language.

“This is a wonderful time to be learning ʻōlelo Hawaiʻi,” said UH Maui College Chancellor Lui Hokoana. “There are more classes and programs than ever, many available online, and having a growing number of learning resources like Hulihua makes it even better.”

The program currently contains a list of approximately 400 five-letter words assembled from some older texts. Donaghy said that while the vocabulary list is incomplete at this time, he will continue to expand the number of words in the coming months.