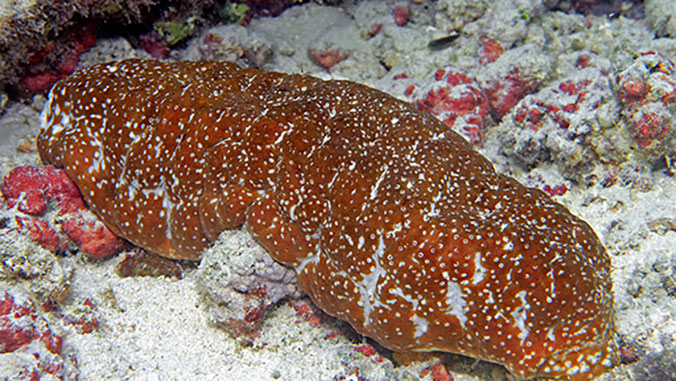 Sea cucumbers are considered a high-value commercial food and the demand for locally-produced seafood is rising. However, so are extreme climatic events that can rapidly change water conditions, especially in coastal environments that include traditional Hawaiian fishponds. A new study funded by the University of Hawaiʻi Sea Grant College Program hopes to establish baseline information required for Hawaiian sea cucumber culture under shifting water temperatures and salinities.

Sea cucumbers are a unique candidate for the production of a high-value, low-trophic species which may improve fishpond ecosystems by enhancing nutrient cycling. The principal investigator of the study is UH Mānoa Associate Research Professor Andre Seale of the College of Tropical Agriculture and Human Resources Department of Human Nutrition, Food and Animal Sciences.

“For several years, revitalization and restoration of traditional Hawaiian fishponds, or loko iʻa, have been on-going,” said Seale. “We are partnering with fishpond practitioners and sea cucumber producers, and offering graduate student training, in our attempt to characterize and test the tolerance of these species.”

Seale explained that the challenge of production, coupled with revitalization of loko iʻa, is compounded by the sea cucumber’s fragile environment.