The University of Hawaiʻi Board of Regents (BOR) on August 18, 2022, approved a $30 million capital improvement project to expand the seating capacity at the Clarence T.C. Ching Athletics Complex, the UH football team home field, from 9,300 up to 17,000 seats. The project includes a new location for the UH women’s track because the expansion requires the new grandstands to be placed on the existing track at the Ching Athletics Complex.

The new track will be located on the two practice fields for football and women’s soccer near the Ching Athletics Complex on the UH Mānoa lower campus. The long range plan is to include seating for 1,200 fans and host track meets and UH women’s soccer matches, currently being played at Waipiʻo Peninsula Soccer Stadium.

The $30 million project follows a $8.1 million dollar project in 2021, which expanded capacity from 2,500 seats to 9,500 seats, and was completed in time for the start of the 2021 season. UH was informed in December 2020 that Aloha Stadium, the Rainbow Warriors’ home field since 1975, would not be available for fans until the new stadium is built. That placed UH at risk of not meeting the NCAA’s minimum attendance requirements of 15,000 fans for Division-1 football. Before the vote, many regents questioned the cost and details of the project.

“I don’t lack confidence in our ability to pull this off and impress with what we have achieved to date, but I am concerned on whether this is the best way to use $30 million under all of these circumstances,” said UH BOR Chair Randy Moore.

The $30 million will come from UH‘s Tuition and Fees Special Funds (TFSF), but the costs may be offset by $50 million funding through federal pandemic relief acts. Though the federal COVID money cannot be used directly for capital projects, it will provide the university the flexibility to use TFSF for the project, “without any negative impact on UH Mānoa campus finances and outlook,” according to the memo from the university to the board proposing the project.

The regents approved the project by a 9 to 1 vote, with one regent excused.

“I am going to choose to vote in favor because I want this team (Rainbow Warrior football team) to know that this part of the challenge is covered,” said Vice Chair Alapaki Nahale-a before the vote. “I absolutely believe in our team. Getting the current complex in the time frame that they did it, at the cost they did it, unbelievable! There is not another team in the state that could have done it so I have no doubt they could for this project.”

The project will be completed in two $15 million phases. The first is the expansion of seating at the Ching Athletics Complex that is scheduled to begin January 2023 and be completed in time for the September 1, 2023 season opener versus Stanford. It includes removing and replacing the grandstands in the Ewa endzone, expanding existing seating in the Diamond Head endzone, adding seating that will wrap around the corners of the field where the current track is located and installing a 75-foot wide video scoreboard currently located at Aloha Stadium. The new seating will not exceed the existing height of the complex.

The second phase is the construction of new track and soccer facilities on lower campus that is scheduled to begin in early 2023 and completed in May 2024. It includes excavation work to level the two existing practice fields; installing a retaining wall and drainage, irrigation, utility systems and the grandstand seating. 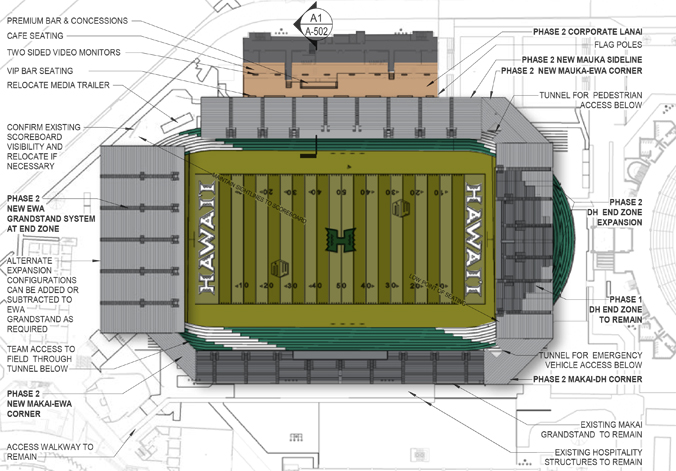