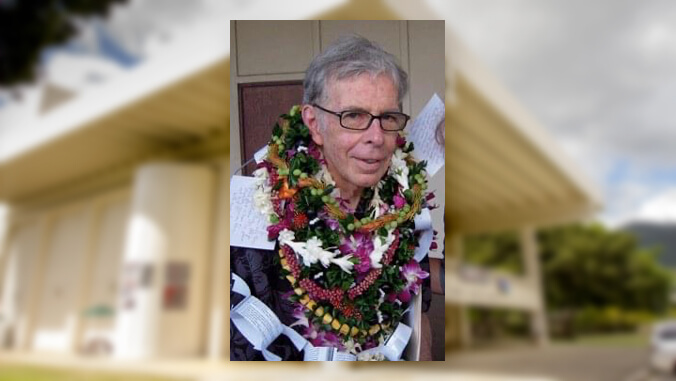 A public memorial is planned to recognize the indelible contributions of University of Hawaiʻi at Mānoa Professor Emeritus William Dennis Carroll to the world of theatre and Hawaiʻi. An accomplished playwright and founding member of Kumu Kahua Theatre, Carroll was a longtime professor and chair of the UH Mānoa Department of Theatre and Dance, where he spent more than four decades encouraging students to write plays and create productions. Carroll will be commemorated at a gathering held at Kennedy Theatre on Sunday, November 27 to coincide with the first anniversary of his passing.

“Dr. Dennis Caroll was a tremendous friend, colleague, mentor and educator. The impact of his legacy will long be felt throughout the halls and hearts of this campus and the extended community,” said Tammy Hailiʻōpua Baker, an associate professor of the UH Mānoa Hawaiian Theatre Program.

Organized through UH Mānoa with support from Kumu Kahua Theatre, the memorial will be held 2:30–4:30 p.m., with a reception to follow on the upper lānai of Kennedy Theatre.

“Kumu Kahua is at its core a playwright’s theatre—reflecting Dennis’ passion for our tremendous local playwrights that share the voices of our community and the cultures reflected here,” said Harry Wong III, a UH alumnus and artistic director at Kumu Kahua Theatre. “Following the challenges last year in holding public gatherings, we are thankful to be able to join with the university he loved in bringing together those touched by his philanthropy, artistry and heart.”

Carroll was born in Sydney, Australia. He joined the UH faculty in 1969, where he taught for 42 years. In 1971, Carroll and a group of Kennedy Theatre graduate students founded Kumu Kahua Theatre, which grew to become a nonprofit organization and venue based in downtown Honolulu, dedicated year-round to supporting and showcasing original works of theatre related to Hawaiʻi.

Carroll died in Honolulu on November 25, 2021 at the age of 81. He is survived by his wife, three children and four grandchildren.

For more information go to the Kennedy Theatre website.