More than 350 guests gathered to celebrate the grand opening of the $37-million Academy for Creative Media (ACM) Student Production Center at the University of Hawaiʻi––West Oʻahu on November 18.

“It’s a fabulous, state-of-the-art-capacity building that will really teach the future to our students,” said Chris Lee, founder and director of the Academy for Creative Media System. “This is really the hub for creative media education throughout the ACM System.”

The facility will link complementary facilities and programs throughout the UH System and across the state as a catalyst for Hawaiʻi’s intellectual property workforce. The facility features industry-standard equipment, including a Dolby Atmos 100-seat screening room and mixing stage, esports arena, post-production suites, emerging media lab, incubator space and industry-standard sound stage.

The Student Production Center is designed to stimulate Hawaiʻi’s production and creative media ecosystem, including the state’s growing film and television production industry. Hawaiʻi’s creative sector, which includes the film, music, digital media and arts industries, accounts for nearly 54,000 jobs across the state.

The new building serves as a connector between academic programming across the UH System and the delivery of hands-on experiences that will prepare students for jobs in motion pictures, video production, design and social media, as well as digital content creation, video game design and development, and the integration of storytelling and technology.

“This building means a lot,” said Joseph Baldueza, who received his bachelor’s degree from UH West Oʻahu in spring 2020, with a concentration in general creative media. “This program means a lot. It always had awesome instructors, a really good and challenging curriculum. Now it has a facility and the equipment to support what we already had.” Baldueza is now a production manager at Marine Corps Community Services Hawaiʻi. 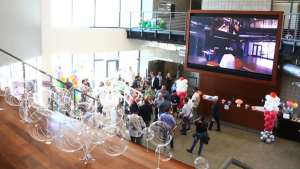 “It’s about giving our students the best opportunity that we can to chase their digital dreams, and we wanted to make sure that they had a world-class facility so that they would pursue anything and everything their dreams could come up with,” Ige said.

The panelists shared insights on the importance of diverse voices in the film industry.

“It’s so important for this space (of diversity) to be in existence and for us to just keep telling our stories because there is a huge, huge shift happening and it’s really, really exciting,” Balmilero said.

To see photos from the event, visit the Grand Opening of the Academy for Creative Media Student Production Center album on Flickr.

For more to go to Ka Puna O Kaloʻi.