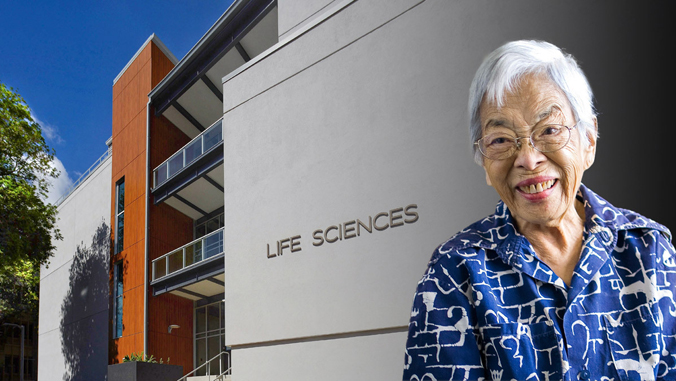 The University of Hawaiʻi Board of Regents voted unanimously to approve the renaming of the UH Mānoa Life Sciences Building after the “First Lady of Limu,” Isabella Aiona Abbott, at its meeting on January 19, 2023, following a groundswell of support from the campus community.

The late UH Mānoa ethnobotany professor emerita and Kānaka Maoli (Native Hawaiian) made an indelible mark in the scientific community, paving the way for success of integrating the excellence of Hawaiʻi’s traditional and customary practices and knowledge into western science. Abbott was also instrumental in establishing the UH Mānoa ethnobotany program, which is the study of the interaction between humans and plants.

The state-of-the-art three-story, 70,000-square-foot facility building, which opened for instruction in fall 2020, will now be known as the Isabella Aiona Abbott Life Sciences Building.

“Dr. Isabella Aiona Abbott truly exemplifies what it means to be a person of significance to the University of Hawaiʻi. And the new Life Sciences Building provides a highly befitting opportunity to honor her life, career and contributions,” wrote UH President David Lassner in his letter recommending the building’s renaming to the Board of Regents.

“It’s about the opportunity for us to use these kinds of recognitions to reflect not only on the legacy but who do we want to be as a community,” UH Board of Regents Vice Chair Alapaki Nahale-a said. “I was really moved not just by the words but the way and the beautiful spirit behind it. The beginning of the 2023, I just feel like this is the type of energy that our system can capitalize on and use to be the aspirational institution we need to be for Hawaiʻi.”

About six years ago, the renaming effort began as a grass-roots campaign. More than 3,000 people signed a petition, and more than 100 people submitted testimony in support. UH Mānoa Native Hawaiian Student Services assisted with publicizing the effort, and held a series of events that included student films, silk screening workshops, classroom visits and more. In addition, other campus groups including the UH Mānoa Faculty Senate, Associated Students of UH, Graduate Student Organization and Kualiʻi Council overwhelmingly supported the renaming.

“She faced numerous barriers to her career advancement but she not only smashed them, she also worked to open pathways for other Native Hawaiian scientists,” Department of Oceanography and Hawaiʻi Sea Grant Associate Professor Rosie Alegado told the Board of Regents. “Most importantly, Izzie’s unparalleled achievements were not made in spite of her upbringing and cultural heritage but because of them.”

Annie Abbott Foerster, Abbott’s daughter, wrote to the Board of Regents, “Our mom, Tūtū and dear friend is undoubtedly smiling her huge and warming smile at this tremendous honor. …May Dr. Abbott’s legacy of selfless service to one another, countless mentorships, and her tireless pursuits in marine botany (limu) combined with the intentional recognition of deeply rooted Hawaiian traditions remain an example and a covering for this building and all who pass through its doors.”

“This is a way that we can continue to increase Native Hawaiian student representation in the STEM fields…the opportunity for students to see someone who looks like them, talks like them and comes from a similar place that they do—somebody who has achieved academic success at the highest levels,” Native Hawaiian Student Services Director Willy Kauai said. “The Life Sciences Building being named after Dr. Isabella Abbott is a really good step that the university took to adddress issues of representation.”

Kauai added, “It reminds society that Hawaiian knowledge, ancestral knowledge is valuable to the university, the students that we serve and to the larger Hawaiʻi.”

Abbott then headed for Stanford University as a research associate and lecturer, studying marine algae on the California coast. Upon her promotion from lecturer to full professor, she became the first woman and the first person of color to become a full professor of biology at Stanford. Abbott became the leading marine botanist of the Pacific, discovering more than 200 algae, which earned her the nickname “First Lady of Limu.”

She and her husband Donald Putnam Abbott retired from Stanford and moved back to Hawaiʻi in 1992. She joined the faculty at UH Mānoa and served as the G.P. Wilder Professor of Botany, and helped establish the ethnobotany program—teaching thousands of students throughout the years. Abbott died in 2010 at the age of 91.

Abbott has made numerous contributions to the advancement of Kānaka Maoli across the UH System. In 1986, she was a co-author of the seminal Kaʻū Hawaiian Task Force Report, along with 18 other Kānaka Maoli faculty and staff. The task force was charged with reviewing the direction and commitment of the UH System to traditional Hawaiian culture and to Hawaiians; identifying programs or obstacles which deter the commitment to Hawaiian culture and to the education of Hawaiians; and to recommend solutions that the university can undertake to overcome these problems and obstacles.

Abbott published eight books and more than 150 research papers and technical reports. She earned the Darbaker Prize from the Botanical Society of America in 1969, the Charles Reed Bishop Medal in 1993 and the National Academy of Sciences Gilbert Morgan Smith Medal for excellence in published research on algae in 1997. Abbott was named a Living Treasure of Hawaiʻi and received a lifetime achievement award from the Hawaiʻi Department of Land and Natural Resources for her studies of coral reefs.

Abbott was also highly involved in the community, serving on the Bishop Museum Board of Directors, Kahoʻolawe Island Reserve Commission and the National Oceanic and Atmospheric Administration Advisory Committee for the Papahānaumokuākea Marine National Monument.