One day soon, technology developed by University of Hawaiʻi researchers and students, may be in harbors and ports all over the world providing daily security and surveillance, along with life saving inspections after natural disasters or terrorist attacks.

The technology is an unmanned port security vessel.

“This is a system that can go in as a robot, keep people at a safe distance, and be able to tell you where it is safe to operate and where it is not safe to operate,” said Margo Edwards, director of Department of Homeland Security National Center for Island, Maritime and Extreme Environmental Security, also known as CIMES, which is based out of UH Mānoa.

“It uses sonar, chemical sensors and infrared cameras,” explains Brian Bingham, an assistant professor at the UH Mānoa College of Engineering. “And it surveys autonomously, in an unmanned fashion, it surveys the harbors.” 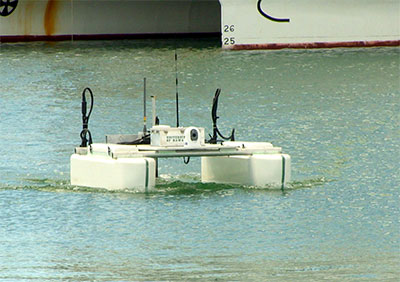 The six-foot long, four and half-foot wide, 160-pound robotic platform also has a high-resolution camera and real time video. It can be deployed rapidly and operated from miles away while providing critical, up-to-the-second information to first responders for maritime security.

The idea came from Hawaiʻi based Coast Guard units sent to Louisiana after Hurricane Katrina.

“They got to the muddy Mississippi and they couldn’t see what was going on underneath the water,” said Edwards. “So they came back to us and said, can you develop some sort of robot that would be able to help us with these kinds of situations.”

The first prototype was built by researchers and students from the UH Mānoa’s College of Engineering and the School of Ocean and Earth Science and Technology.

“It leverages a lot of what the UH is good at,” said Bingham. “And you know being an island and having, you know, our ports are very important so we feel it is really relevant to the state and what we do at the university.”

Including giving students real world opportunities, like working on this important project.

“Having them be a part of this industry and be a part of it in Hawaiʻi is what I like about it,” said Bingham.

The project took a major step towards becoming a commercial reality in the fall of 2013 when UH entered into an agreement with Battelle, the largest non-profit research organization in the world.

“The big thing that Battelle can do with this is that we can take and use our engineering and commercial expertise to transition this technology from the lab and into the field,” said Haskell Jac Fought of Battelle’s maritime systems division.

A key player from the start has been CIMES, which considers the Battelle partnership to be critical in more ways than one.

“They’re helping us to be able to establish our own workforce in Hawaiʻi by telling us what it is we need to train the young people coming up to able to do to build this and market it,” said Edwards.

The money that could potentially come back to UH for related research could fund more technological advances and create more jobs. This project is a great example for the UH Innovation Initiative or HI2—creating jobs by building a billion dollar annual research enterprise in Hawaiʻi.