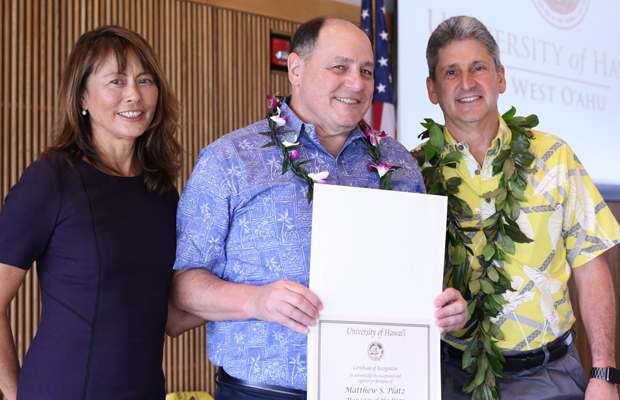 The University of Hawaiʻi at Hilo maintenance crew, Matthew Platz and UH Mānoa’s Luke Flynn have been selected as the university’s nominees for the Governor’s Awards for Distinguished State Service. The award honors the state’s executive branch employees and managers who exemplify the highest caliber of public service and dedication to serving the people of Hawaiʻi. There are three awards—Employee of the Year, Manager of the Year and Team of the Year.

All departmental nominees will be recognized at an awards ceremony on May 18 where the state winners will be announced.

This UH Hilo team of eight is “small but mighty!” Each individual has superior skills in their own fields, but when the project calls for it, they all help out to get the job done. Their efficiency has enabled them to complete more complex tasks in-house rather than outsourcing, which has saved the campus thousands of dollars.

Under the supervision of Nagao, who was recognized with the University of Hawaiʻi President’s Award for Excellence in Building and Ground Maintenance in 2016, this team works hard and serves as an inspiration to the entire Hilo campus.

They switched from paper work orders to a computerized system where each crew member can receive and respond to requests directly. They also adjusted their shift schedules in order to be available to the campus for extended work hours.

Their positive can-do attitude has inspired others to see how true teamwork really does work.

Matthew Platz, the vice chancellor for academic affairs at UH Hilo, has created an outstanding team of deans and directors and established an environment where they share responsibility and psychological ownership for institutional effectiveness.

Platz co-authored the $20 million ʻIke Wai EPSCoR grant has mentored a number of faculty members in successfully competing for grants and funded research and curriculum development. With his support, the STEMHonors program was created and scholarships were established, providing much needed support for economically disadvantaged students.

He is able to make quick and thoughtful executive decisions and leads by example. Platz encourages people to work to their full potential, supports professional development and enables his employees to make the most of their opportunities.

His colleagues say he is, “a visionary with courage to lead institutional change” and “a true leader who inspires, empowers and brings out the best in those around him.”

Luke Flynn, director of the UH Mānoa Hawaiʻi Space Flight Laboratory will be honored at the June Board of Regents meeting.