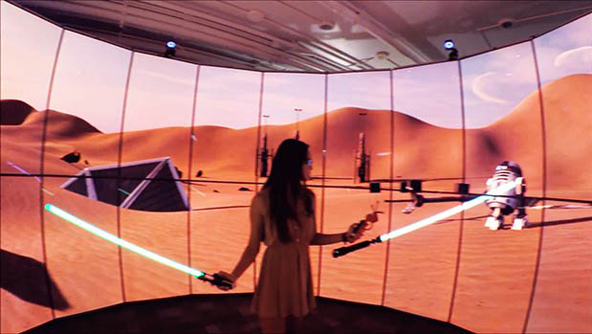 Users can battle with lightsabers or dogfight through a universe filled with starfighters, TIE fighters and an armada of star destroyers.

The (research and fun) possibilities are endless now that UH Mānoa is home to the best hybrid visualization system in the world that combines immersive virtual reality with ultra-high-resolution display walls. The Destiny-class CyberCANOE, which stands for cyber-enabled Collaboration Analysis Navigation and Observation Environment.

“We wanted to take advantage of the [Destiny-class CyberCANOE’s] capabilities and make something really cool,” Kawano said.

CyberCANOE users can go under the sea, explore outer space and probe microscopic elements of the human body without leaving campus.

Computer and Information Sciences Professor Jason Leigh is the system’s creator. His students were deeply involved in the design and construction of the CyberCANOE with investment and partnership from the National Science Foundation and the UH Academy for Creative Media System.

With 256 megapixels, the cylindrical CyberCANOE is the ultimate tool for scientists and researchers to visualize big data at resolutions that are 100-times better than commercial 3D displays. The diameter is 16 feet, and the walls are eight-feet high.

The Destiny-class cost about $250,000 to build and is actually the seventh and best CyberCANOE Leigh has built in Hawaiʻi over the past couple of years. His Laboratory for Advanced Visualization Applications (LAVA), where the Destiny-class CyberCANOE is housed, is planning to hold an open house in August 2017. 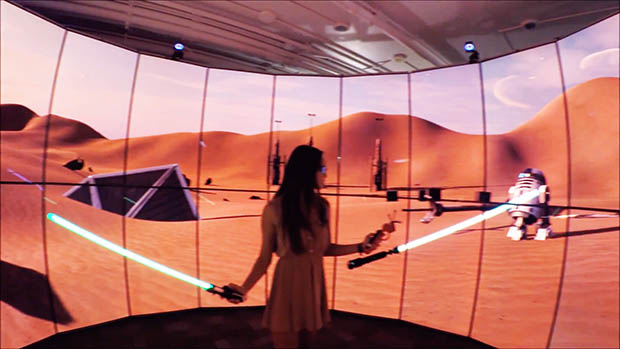