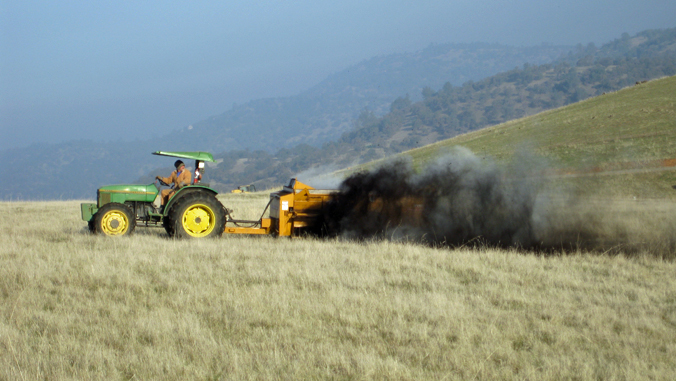 Want to do something about global warming? Start by looking at the ground. Managed well, soil has an ability to trap carbon dioxide that is potentially much greater than previously estimated, according to a recent University of Hawaiʻi at Mānoa study that claims the resource could “significantly” offset increasing global emissions. The authors call for a reversal of federal cutbacks to related research programs so that scientists can learn more about this valuable resource.

The research, published in two overlapping papers in Annual Review of Ecology, Evolution and Systematics and Global Change Biology and co-authored by two researchers in UH Mānoa College of Tropical Agriculture and Human Resources (CTAHR), emphasizes the need for more research into how soil, if managed appropriately, could mitigate some of the effects of a rapidly changing climate.

“Many people think of the soil as just dirt,” said Susan Crow, a soil ecology professor in the Department of Natural Resources and Environmental Management (NREM) in CTAHR and a co-author of both papers. “But caring for the land by maintaining or rebuilding organic matter, rich in carbon and essential for the life of soil, is a win-win for building resilience in our landscapes and communities through protection of food security, reduced erosion and water pollution, and improved drought tolerance.”

Organic matter in soil, such as decomposing plant and animal residues, stores more carbon than do plants and the atmosphere combined. Unfortunately, the carbon in soil has been widely lost or degraded through land-use changes such as unsustainable forest and agricultural practices, fires, nitrogen deposition, and other human activities. But there is still great promise, according to the study’s authors. Improving how the land is managed could increase soil’s carbon storage enough to offset significant future carbon emissions. The possible approaches include reduced tillage, year-round livestock forage, and compost application. Planting more perennial crops, instead of annuals, could store more carbon and also reduce erosion by allowing roots to reach deeper into the ground.

While scientists are now able to remotely map and monitor environmental changes on Earth’s surface, they still don’t have a strong understanding of the interactions among biological, chemical and physical processes regulating carbon in soils. This knowledge is critical to understanding and predicting how the carbon cycle will respond to changes in the ecosystem and safeguarding natural services people depend on, such as crop pollination and underground water storage.

“As we learn more about the soil under our feet, we can be better equipped to make decisions that will help us grow food, protect natural ecosystems, and combat climate change,” said co-author Rebecca Ryals, an agricultural ecologist also in NREM.

A rapidly changing climate—and its effects on soil—make these scientific advances all the more urgent. However, funding pressures such as federal cuts to climate science, combined with turnover in science staff and a lack of systematic data, threaten progress on soil carbon research. The authors call for a renewed push to gather significantly more data on carbon in the soil and learn more about the role it plays in addressing climate change and food security. State-level soil health actions, including Hawaiʻi‘s recent Carbon Farming Task Force (Act 33, (SLH 2017), can benefit greatly from soil carbon data networks and further solutions-based research.