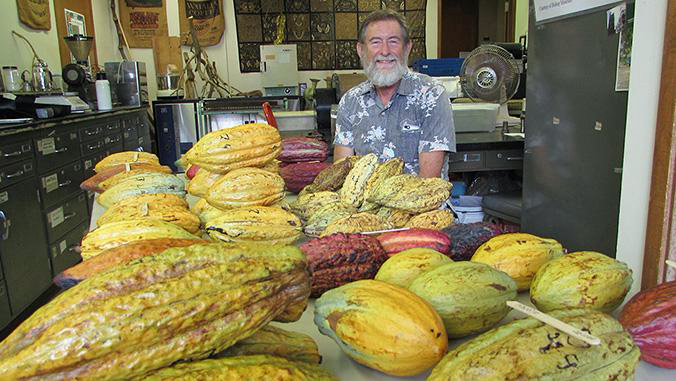 Beans from a University of Hawaiʻi cacao trial begun in 2005 were among the 18 International Cocoa Awards winners announced at the Salon du Chocolat in Paris in November. The cacao from three locations in the College of Tropical Agriculture and Human Resources (CTAHR) field trial were selected as best in the Asia, Pacific and Australia category, along with an entry from Jeanne Bennet and Bruce Clements’ Nine Fine Mynahs Estates in Waialua and samples from Australian, India and Malaysia.

The Cocoa of Excellence Programme is held every two years by Bioversity International to recognize flavor and diversity of cocoa according to its origin. The 13 other cocoa beans of note were from South America, Africa/Indian Ocean and Central America/Caribbean regions.

Bittenbender is a cacao, coffee and kava specialist in the Department of Tropical Plants and Soil Sciences. He tended the entered cacao at CTAHR’s Urban Garden Center in Pearl City and Waimānalo Experiment Station and at Kualoa Ranch makai. O‘Doherty, who now works as an international cacao consultant, fermented and dried the beans.

Competition organizers lauded the flavor and diversity of cacao at the 2017 event. The genetic origin of UH’s competition cacao is primarily upper Amazon. The flavor profile posted by evaluators suggests a distinct and naturally acidic fruitiness followed by a raisiny component balanced by roasted cocoa with moderate bitterness and astringency.

“With no major cacao diseases in Hawaiʻi, we are in a unique position to grow many rare and fragile cacao varietals, and the pollinator is an endemic insect” O‘Doherty said. The UH cacao trials include eight selections grown from pods produced in Hawaiʻi plus two international varieties, all grafted onto seedling rootstock from Mānoa Valley and grown at six sites around O‘ahu.

Bittenbender and O‘Doherty have worked closely with Kauaʻi producer William Lydgate of Steelgrass Farm, who also made the initial shortlist of 50 samples from 40 countries, and they collaborated on the cacao chapter for the book Specialty Crops for Pacific Islands published by the University of Hawaiʻi Press.