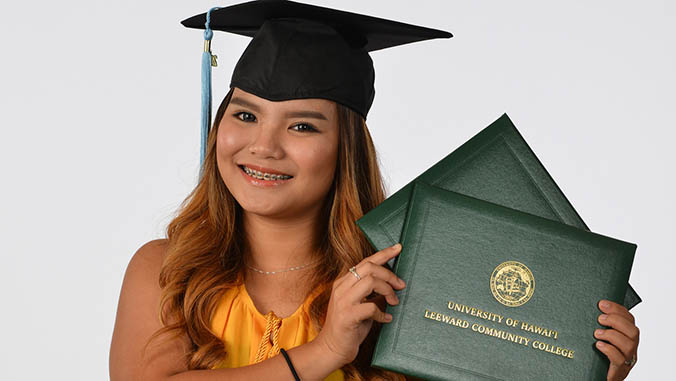 Rovy Anne Dipaysa looked perfectly at home at Leeward Community College, clad in a t-shirt and jeans, intently taking notes in a botany class, like other students. However, the logo on her blue shirt, “Waipahu High School, Early College” hinted at her extraordinary accomplishments.

On December 7, 2017, the 18-year-old immigrant, who did not speak English when she moved to Hawaiʻi from the Philippines in the seventh grade, earned her associate in arts degree from Leeward CC—five months ahead of her scheduled high school graduation in May 2018. 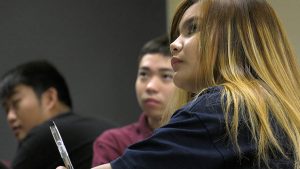 She is the first Early College student in the state to earn an associate’s degree before graduating from high school. Moreover, Dipaysa, who is considered economically disadvantaged, did it for free, since Early College is covered at some schools by a legislative grant to the Department of Education and by a McInerney Foundation grant at Waipahu High School. No wonder she credits Waipahu’s Early College with changing her life.

“It helped me to come out of my shell, because like I said when I was in 7th grade and 8th grade, I was really shy and just (sat) in the corner not speaking,” Dipaysa recalls. “Now I have more confidence to do public speaking and…know for myself that I can further my education.”

Her accomplishment amplifies the growing success of dual credit programs, such as Early College, providing high school students with the opportunity to take college-level courses, across the state. UH is offering 269 college-credit courses in public and charter schools this school year, a more than 33-fold increase from the eight it offered in 2011.

Leeward CC Chancellor Manny Cabral said, “Rovy is an Early College pioneer. She was relentless in her pursuit of her educational goals and took advantage of all the opportunities afforded her, from working closely with our counselors to accessing the pilot program offering Pell Grants to high school students. She’s leading the way for the many other Waipahu High School students who will be receiving their AA degrees in May 2018. We are all very proud.”

Dipaysa says her favorite college class has been Asian 205 Contemporary Philippine Issues for which she marched in the Martin Luther King Jr. Day parade, rallied in support of the Hawaiʻi Promise scholarship program at the state capitol and much more.

“We sent testimonies and we were there during the hearing to testify in person,” she said. “I love that. I love that class because we enhanced our rights.“

She is now focused on earning a bachelor’s degree in nursing with an eye towards a doctorate after that.

As Gov. David Ige said when he recognized Dipaysa in his January 2017 State of the State address: “With students like Rovy and her cohorts, how can we not succeed in building a workforce more than equal to the challenges of the 21st century?“