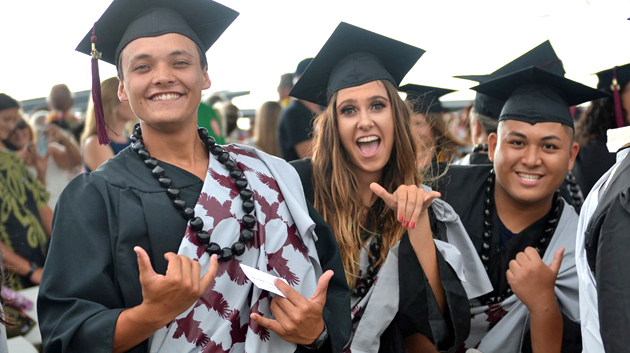 Thanks to the affordability of the 10-campus University of Hawaiʻi System, Hawaiʻi is ranked ninth in the nation when it comes to low student debt, according to the latest annual report by The Institute for College Access and Success. The report looked at debt carried by students at public and nonprofit colleges and universities. Hawaiʻi was among the lowest in the country for the amount of debt students carry, and the percentage of students who graduate with a bachelor’s degree with debt.

The average debt for a Hawaiʻi student after graduating with a bachelor’s degree is $25,125, $3,500 below the $28,650 national average. Connecticut had the highest student debt at $38,510 and Utah the lowest at $18,838. About 65 percent of college students nationally graduate with debt. Hawaiʻi is tied for 6th lowest in the country at 49 percent. Utah is the lowest at 38 percent, followed by Alaska and the District of Columbia at 46 percent.

The Hawaiʻi Promise scholarship program is one example of how UH and state leaders are working to keep the cost of higher education affordable. The program provides assistance to qualified community college students for any financial needs not met by financial aid, federal grants, benefits and scholarships. Those costs can include tuition, fees, books, supplies and transportation.

“We are extremely grateful for the warm reception and strong support we received in establishing the Hawaiʻi Promise program for our community college students,” said UH President David Lassner. “Extending the Hawaiʻi Promise program to UH Hilo, UH Mānoa and UH West Oʻahu is one of the best ways we can move forward together to reduce the college debt burden for Hawaiʻi’s university students as well.”

Even before the Hawaiʻi Promise program, UH’s seven community colleges were ranked the most affordable in the nation in 2016.

The in-state tuition at all three of UH’s four-year campuses including the system’s flagship campus, UH Mānoa, is below the national average for public institutions. UH Mānoa is one of 115 research universities in the country classified R1 and is consistently ranked in the top two percent nationally and internationally.

The Institute for College Access and Success is an independent, nonprofit, nonpartisan organization working to make higher education more available and affordable for people of all backgrounds. Student Debt and the Class of 2017 is the instituteʻs 13th annual report on debt at graduation. To learn more download the report (PDF).