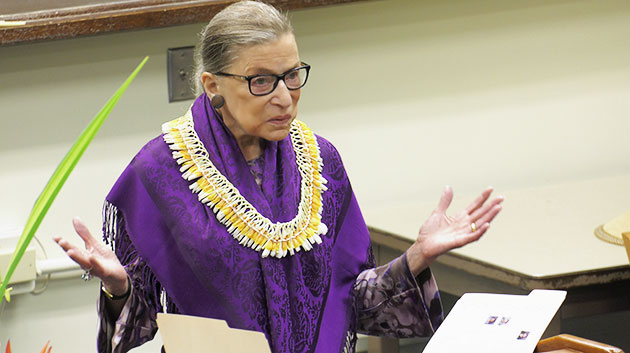 “RBG and Other Notorious Women,” a two-part event featuring a panel discussion with four outstanding Hawaiʻi women with legal backgrounds followed by the screening of the RBG documentary on U.S. Supreme Court Associate Justice Ruth Bader Ginsburg, is set for Friday, October 26, 5–7:30 p.m. in Classroom 2 at the William S. Richardson School of Law at the University of Hawaiʻi at Mānoa campus.

Members of the panel will discuss the influence of the sitting justice popularly known as the Notorious RBG:

“Justice Ginsburg, whose most recent visit as our jurist-in-residence in 2017 was a particularly memorable week, has had an extraordinary career as a judge as well as a lawyer and scholar,” said Dean Avi Soifer. “The film explores the career of this remarkable woman and gets to the heart of how she did so much to change the world.”

A special moment in the award-winning documentary highlights a UH connection, as Ginsburg admires a special jabot (judicial collar) given to her by the law school. The jabot includes rare Niʻihau shells in pale pink and yellow.

The program is free and open to the public. RSVP to ronettek@hawaii.edu.

See the full story on the law school website.