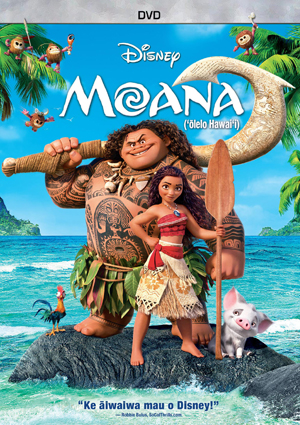 The ʻŌlelo Hawaiʻi (Hawaiian language) version of Walt Disney Animation Studios’ Moana will be distributed to schools across the state as the culminating act of a year-long production that strives to encourage students to learn the Hawaiian language.

Moana, the story of an adventurous teenager who is inspired to leave the safety and security of her island on a daring journey to save her people, is the first Disney picture to be re-recorded in ʻōlelo Hawaiʻi.

“On behalf of the students, faculty, and staff from five UH campuses, our team who translated roughly 10,000 words, our student engineers who recorded 4,000 sound files, and our spectacular cast starting with Auliʻi Cravalho and the more than 30 locally cast ʻōlelo Hawaiʻi speakers and singers who made this all come to life, we could not be prouder to be able to provide free copies of the Disney Moana ʻŌlelo Hawaiʻi DVD to every accredited school in the state,” said Chris Lee, Academy for Creative Media (ACM) director and founder. “This was an educational endeavor to encourage students to learn ʻōlelo Hawaiʻi and we are so grateful to our partners at Disney Animation and Disney Character Voices International for making this possible.”