University of Hawaiʻi at Mānoa Professor of physics Peter Gorham, along with a team of researchers, discovered new evidence that suggests some Antarctic particles do not fit the standard model of physics. The particles were detected with the Antarctic Impulsive Transient Antenna (ANITA).

ANITA, a stratospheric balloon payload flying over the Antarctic, was designed to detect cosmic-ray air showers through radio-wave signals on their way down or back up after bouncing off the ice. During flights in December 2006 and December 2014, ANITA detected a fountain of high-energy particles erupting from the ice that resembles an upside-down cosmic-ray shower.

“What we saw is something that looked just like a cosmic ray, as seen in reflection off the ice sheet, but it wasn’t reflected,” said Gorham. “It was as if the cosmic ray had come out of the ice itself. A very strange thing. So we published a paper on that, we just suggested that this was in pretty strong tension with the standard model of physics.”

Scientists analyzed the particle and thought it could be a secondary particle produced by a neutrino interaction. Neutrinos are fundamental particles of the universe, born in the energy of the Big Bang. They can tell us everything from the birth of the universe to the nuclear reactions that power cities.

“It could indicate that we’re actually seeing a new class of sub-atomic particle that’s very penetrating,” said Gorham. “Even more penetrating than a neutrino, which is pretty hard to do. This particle would be passing through almost the entire earth. So this could be an indication of some new type of physics, what we call beyond the standard model of physics.”

The detections suggest that signals came from upward-moving particles that tunneled through the earth before erupting from the ice. But cosmic rays are not predicted to do that in large numbers. One possibility is that cosmic rays from a bright supernova blasted all the way through the earth.

The ANITA project continues to attract some of the best minds, as well as research dollars, to UH to do cutting edge research at the vanguard of science. The project received funding from NASA for three flights in Antarctica. ANITA’s first flight was $8.1 million and the second and third flights were $4.1 million and $4.6 million. Results from the third flight were reported in 2017 and recently published by the American Physical Society.

“As physicists we’re often, like many other scientific fields, we tend to go and look under the streetlights that are already on when weʻre trying to search for answers or greater understanding,” said Gorham. “But when you do a new experiment, something completely different like ANITA, very often you can turn on some brand new streetlights out there in the dark wilderness. It gives us a chance to look for new types of models and theories and evidence in places that we never got to look before.” 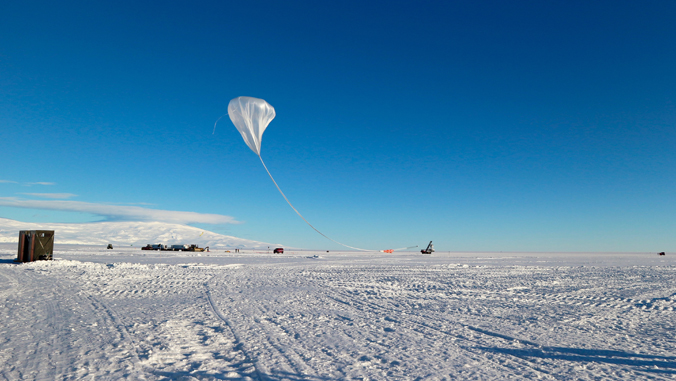