Cast and crew of the popular University of Hawaiʻi at Mānoa production ʻAuʻa ʻIa: Holding On are preparing to take the Hawaiian language play to New York City. This is the first time a UH Mānoa Department of Theatre and Dance production has been selected to perform in the Big Apple. The invite is a major accolade.

“It definitely will put us on a national map as the entity as the university to come to, to study indigenous theater,” said UH Mānoa Hawaiian Theatre Program Associate Professor Hailiʻōpua Baker.

Kumu (teacher) Baker is the playwright and director of the hana keaka (Hawaiian theatre) play, which is performed predominantly in the Hawaiian language with bi-lingual segments.

Organizers launching the inaugural Reflections of Native Voices Native Theater Festival in NYC invited the cast to perform “Off Broadway” in January.

Taking the production to the East Coast comes with its challenges. The 32-member cast and crew have just a few weeks to raise $100,000 to cover airfare, cargo and accommodations.

You can help by donating to the Hawaiian Theatre Fund through UH Foundation. 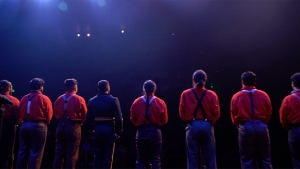 The play captures pivotal moments in Hawaiʻi’s history from the perspective of four haumāna (students). While researching a project for class, they embark on a journey that takes them into the repository of 19th century Hawaiian language archival materials. Hawaiian ʻoli (chant), mele (songs) and hula transport audiences through time.

Ākea Kahikina plays one of the production’s main characters. The 26 year old is double majoring in Hawaiian Theatre and ʻŌlelo Hawaiʻi (Hawaiian language) in UH Mānoa’s master’s program. Before attending the university, Kahikina auditioned for roles on mega Broadway productions such as Hamilton and Aladdin. He’s thrilled to be returning to the big city.

“It’s the mecca of theater—where people have not heard pidgin before, not heard ʻŌlelo Hawaiʻi before. They get to actually hear that and see a whole other perspective that fights against just coconut trees and pineapples,” Kahikina said.

The production is scheduled to be the opening act of the six-day indigenous festival. ʻAuʻa ʻIa will also take the stage at one of New York’s leading Off-Broadway venues.

“The opportunity to legitimize our moʻolelo on that type of platform to say that our stories are ku like a like. Our stories are just as valid,” said UH Mānoa graduate student and actor Kaipu Baker.