The University of Hawaiʻi at Mānoa Hawaiian language production, ʻAuʻa ʻIa: Holding On brought down the house in New York on January 7 as the featured opening act at an off-Broadway festival. Organizers of the inaugural Reflections of Native Voices Native Theater Festival, invited the 35-member cast to perform. The event spotlights plays written and performed by representatives from a number of indigenous cultures, including members from the Sioux and Navajo tribes.

UH Mānoa student Dylan Chase Lee plays one of the production’s main characters. “It felt good to connect with other people, other cultures because this is a festival for native voices. People from all over, all walks of life, all walks of cultures,” Lee said.

ʻAuʻa ʻIa, performed mostly in ʻŌlelo Hawaiʻi (Hawaiian language) is scheduled for four performances in Manhattan’s East Village. The production captures pivotal moments in Hawaiʻi’s history from the perspective of four haumāna (students) and features ʻoli (chant), mele (songs) and hula that transport audiences through time. During the play’s kick-off performance, some audience members were moved to tears.

Lead actress Jorin Pōmaikaʻi Uʻilani Kuʻulei Young plays Ala. The 21-year-old comes from a long line of Hawaiian musicians and is on a mission to leave a lasting impression of her island lineage with crowds that come to see the play.

Young, a UH Mānoa Hawaiian Theatre major, is set to graduate with a bachelor’s degree this spring.

UH Mānoa Professor Hailiʻōpua Baker is the playwright and director of the hana keaka (Hawaiian theatre) play. It debuted in front of sold out crowds at Kennedy Theatre in September 2019. This is the first time in UH’s history that a production has been invited to perform in the Big Apple.

The cast and crew say they’re humbled and thrilled to represent both the university and Hawaiʻi.

“That excitement and honor that people feel being selected for us to go, that’s what’s fueling everyone’s response,” said Baker.

Mobilizing a theatrical production is no easy task and is especially challenging when it requires flying nearly 5,000 miles cross country. The trek comes with a $100,000 price tag but generous donations helped cover costs for the cast and crew’s airfare, cargo transport and accommodations. 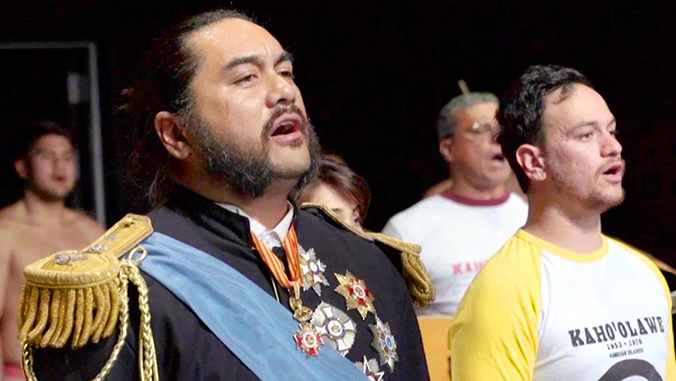